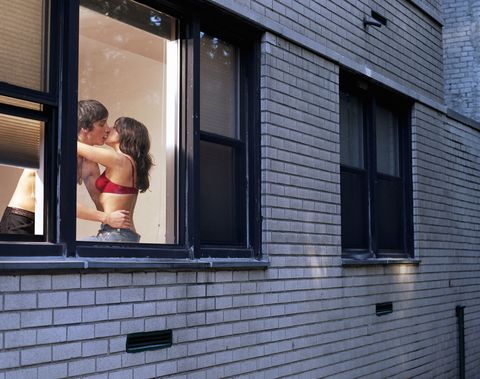 All over the Internet, there are oddly specific and hilariously outdated state and local laws about what you can and can't do in the bedroom (and at the rodeo and in meat freezers, but we'll get there). Since they exist in multiple reputable places in the same exact form, it's easy to believe they're true. But as it turns out, they're bogus, despite what an oft-cited website called WeirdSexLaws.com says. Here, we set the record straight on some of the most famous whoppers you shouldn't fall for, and the one that may actually be legit.

1. No Unprotected Sex With Satan in Bakersfield, CA

Perhaps this seemed like fact because the city, about 120 miles north of Los Angeles, was plagued by child abuse cases in the 1980s that books like In Pursuit of Satan: The Police and the Occult and Ordinary Violence: Everyday Assaults Against Women Worldwide and news sources like The Bakersfield Californian and The New York Times linked with a satanic sex ring. But the associate city attorney at the Bakersfield City Clerks Office told us that this ordinance never existed, and it's just an urban legend.

2. No Fornicating in Walk-in Meat Freezers in Newcastle, WY

Can't you picture two teens working at a grocery store deciding to go at it in this secluded, albeit chilly, spot? And then, whoops, contaminating the meat with bodily fluids? So it may not seem that weird that this small town near the South Dakota border would have had to outlaw this. A call to this city's office assured us that this law is not on the books, though they can't confirm that it never existed.

3. No Sexual Favors to Settle Billiard Debts in Anniston, AL

Here's another case that sounds like a law had to be instated after someone tried doing this, only for it to backfire in spectacular fashion. But an email from the city clerk there said there's no record.

4. No Shooting a Gun While a Woman is Having an Orgasm in Connorsville, WI

First of all, this town, about an hour-and-a-half outside of Minneapolis doesn't have a governing body, so they couldn't have made a law. Their clerk referred us to neighboring New Haven, Wisconsin, and their clerk shared a funny tidbit: They get phone calls about this once a year, but the law has never existed.

5. No Sex with Animals Weighing More Than 40 Pounds in Washington State

6. No Surprising Couples Having Sex in Cars in Couer d'Alene, ID

The myth goes that police officers in this town near the Washington state border can't approach parked cars if they suspect passengers are getting busy inside. Instead, they must drive up behind the vehicle, honk three times and wait approximately two minutes before getting out to investigate. We can't imagine why someone would get so detailed with this fabrication, but it is just that. The office of the city attorney told us they have never had such an ordinance.

7, 8 and 9. No Well-Lit Sex, Non-Missionary Intercourse or Tickling in Virginia

We always thought Virginia was for lovers, so we were surprised when these prohibited moves came across our desks. It turns out Virginia has a searchable database of all their laws. And no matter how many different variations of those words we tried, not a single one of those acts came up, even though plenty of other sex laws did.

10. No Sex With Rodeo Clowns in Front Of Horses in Massachusetts

Like Virginia, the Bay State also allows anyone with Internet access to search their laws. So we did, to no avail. We also put a legal librarian for the State Library of Massachusetts on the case, who found only one law related to rodeos, which most definitely didn't pertain to sex or horses for that matter (though, fun fact, there are more than 4,000 laws about those beloved beasts).

11. No Sex in an Ambulance if You're Female in Tremonton, UT

The rumor went that having sex while en route to the hospital could result in a misdemeanor charge for a woman. Men, on the other hand, would face no criminal charges. What? Three cheers for equality: This is false. The police chief of this city an hour north of Salt Lake City said that as far as he can tell, this was never a city ordinance, even though people ask him about it every couple of years.

And heres a nutty-sounding one that is true:

Or at least was: No Sex on Your Wedding Day While Hunting or Fishing in Oblong, IL

Why would anyone attempt to consummate their marriage with a gun or fishing rod nearby? Were not sure, but this may still be a law. According to the village clerks office, this was on the books, but because a flood damaged their only hard-copy records, they're not sure if the law ever had been overturned.

A special thanks to the clerks, librarians, police chiefs and recorders who didnt automatically dismiss our calls and emails as pranks.