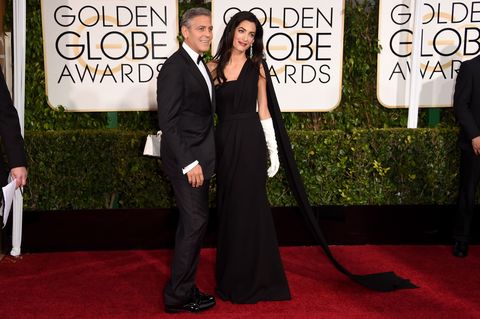 We have many reasons to be thankful for Amal Clooney. There's her laundry list of accomplishments that inspire us–she most recently represented Armenia in a case involving the denial of the genocide by a Turkish politician; her nonpareil style, which has single-handedly revived the evening glove because class; and her ability to skillfully shut down reporters who ask her sexist questions on the job. And now, we have another biggie to add to the list: her significant role in changing the modern dating landscape.

Match.com has unveiled their official Singles in America 2015 survey, and one of the most promising findings is what they've deemed the "Clooney effect." The actor appears to have inspired a social shift amongst single men as the majority have no qualms about dating a woman who is more successful. In the survey, which polled 5,675 singles, 87% of men said they would not only date a woman who makes more money than they do, but also one who is better educated and more intellectual. Plus, 90% of men are okay with a woman asking them out. If that doesn't shatter 1950s gender stereotypes, we don't know what does.

The survey also finds that single women are more independent than ever and calling the shots in relationships. They want more personal space and time with girlfriends, as well as a partner who is more adventurous. Not to mention, 89% of women want said partner to have a sense of independence.

Other interesting findings about U.S. singles from the survey include that 31% met their last first date online, 54% believe in love at first sight, 89% believe you can stay married to the same person forever, and emoji users in their 20s, 30s, and 40s were more likely to report having sex monthly than non-emoji users. [Inserts high-five emoji]. View all the results here.

How to Be the World's Worst Matchmaker

The Art of Defining the Relationship: A Man Explains His Side