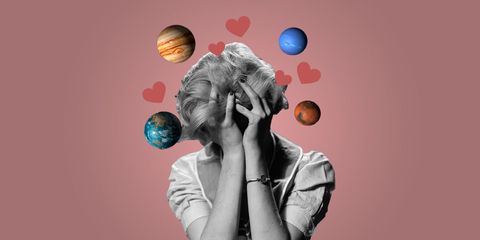 This year might have shut your heart down faster than a restaurant crawling with football-size rodents, but listen to me, your friendly neighborhood star whisperer who is also very active on Twitter—2017 will be lit! The heavens command it!

With saucy señorita Venus in your intimacy house for 3 minutes starting at 6:44 a.m. EST on the first Monday in February, all you have to do is blink your right eye five times in quick succession, and the object of your affections will be powerless. Slay! Is he/she right for you, though? Maybe. Maybe not. The omniscient space pebbles have not made that part clear to me.

Due to the arbitrary alignment of the planets, you will react to another set of circumstances as an individual with her own unique background and experiences. But uh oh! During this blame-offsetting-ly long period of time, Mercury comes barreling in like the Kool-Aid Man—but backwards! Because he's in ::strobe lights, an alarm that sounds like EEEEEEOOOO:: ~retrograde,~ get it? This 67-day window allows you to attribute Tinder messages that don't land and Tinder messages that do land but on boys named Chase to a stony, celestial cake pop that cares naught what happens to you, a puny meat bag that lives 48 million miles away.

Then Mercury goes retrograde again from May 24 to December 31. Don't leave the house if you want to live!

"This 67-day window allows you to attribute Tinder messages that don't land to a stony, celestial cake pop that cares naught what happens to you, a puny meat bag that lives 48 million miles away."

But amour conquers all, including personal safety! Now is not the time to stay in—because the more you go out, the higher the probability you'll meet someone, which is a check in the W column for both of us, which in turn makes me look like I've got a direct line to the stars, even though what I really have is an understanding of rudimentary statistics. For this reason, take extra care with your appearance and treat yourself to a Rick and Morty keyring but not a haircut because we all know you haven't got the finances or emotional strength for a J.W. Anderson Pierce bag or bangs right now, yikes.

But whatever! You is kind, you is smart, and everything is awesome, dear fill-in-the-sign! 2017 is YOURS WOOOOOOOO!!

[James Earl Jones: Everything was not awesome.]