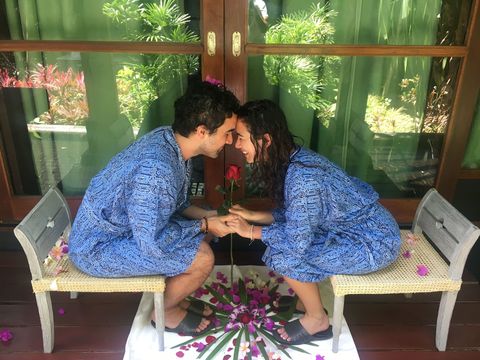 I just moved in with my boyfriend, James—in a foreign country, no less—so we're currently enduring the weird transition of going from lovers to full-time roommates. He now knows what I look like when I fall asleep with a sheet mask on, and I now know what it's like to fall into the toilet in the dead of the night because he left the seat up.

And if I'm being candid, Netflix—sans chill—has started to become our nightly routine, which is how we ended up here, drenched in hot oil and covered in rose petals for the sake of sexual healing.

Let me back up. To celebrate Valentine's Day, James surprised me with a romantic weekend at the Four Seasons Resort in Langkawi, a group of islands on Malaysia's west coast. We spent two totally blissed-out days lounging by the infinity pool and watching monkeys try to break into our private jungle villa, so as a "thank you" for the trip, I treated him to a couple's massage at the resort's legendary Geo Spa. Its treatments claim to utilize the ancient energies of the surrounding 500-million-year-old earth—which is to say, it's basically the stuff of Gwyneth Paltrow's dirty dreams.

After poring over the spa menu, the closest thing I could find to a couple's massage was the "Raja & Ratu Connect," otherwise known as "a majestic dose of love for ultimate couple connectivity." The ritual, which is meant for couples to experience together, focuses on three specific chakras—water, heart, and crown—and promises to "maximize emotional and sexual connection, love, and universal blessing." No, I had no idea what a "chakra" was at the time, but I booked it and hoped for the best. It sounded like exactly what we needed.

A quick google of "chakras for dummies" told me that apparently we each have seven energy centers throughout our body known as "chakras." Each one corresponds to a major nerve center in the body and influences our psychological, emotional, and spiritual wellbeing. Each of these chakras needs to stay "open" in order to make sure that the energy can flow freely.

You still with me? Good.

So the treatment I booked us was designed to connect our energies on an intellectual, spiritual, and emotional level—which will allegedly lead to better sex. (This can apparently also be achieved through tantric sex, but between Westworld and the new season ofGirls, we haven't had time to try that at home.)

The treatment started with a 45-minute head-to-toe salt scrub, which prepped our bodies for whatever chakra magic was about to happen. Then it was back to the 13-headed shower to cleanse ourselves and get ready to open our hearts, minds, and bodies to one another (though to be honest I was ready to "open" myself right there in the shower what with all of the high-budget-porno vibes happening).

Next came 20 minutes in the steam room, followed by an hour long lymphatic massage with sensual oils: Mawar, the oil of love, Limau Nipis, the oil of bliss, and Bunga Melur, an oil for stimulating the flow of love. At the end of the massage (during which we both fell into deep, deep sleeps), the therapists slowly poured warm oil on our heads and massaged it into our scalps, which made every salon shampoo experience I've ever had seem like child's play.

After the head-to-toe oil rubdown was over, the therapists woke us from our slumbers and led us outside to two flower-covered chairs in a private garden for our blessing ceremony. We were each handed a bracelet—Rose Quartz for me to signify our "unconditional love" and Tiger's Eye for him to honor the "stability and strength of our bond"—and told to hold it in our hands while making three wishes for our relationship. Which sounds pretty nutty, but it was *way* too late to turn back.

We put the bracelets on each other's wrists, which felt suspiciously wedding-y and may even mean that we're legally married on the island of Langkawi. Then the therapists sang a Malaysian love chant and sprinkled flower petals over our heads while we touched foreheads (or "bonded our third eye chakras"), staring into each other's eyes and trying not to laugh.

When the ceremony was over, the therapists gave James a rose to present to me and left us alone in the garden to "give us some privacy." We weren't sure if that meant we had permission to start doing the deed right then and there, so we decided to wait until we got home that night to see if the treatment's magic actually worked.

After hours of traveling (during which we came very, very close to joining the mile high club), we finally got home, and jumped each other's bones immediately. The sex was crazy passionate, lasted for a marathon amount of time, and ended in the most intense orgasm of my entire life. I don't know if it was the chakra-bonding or the fact that we had spent the day in the most sensual place on the planet, but whatever happened in that jungle villa seriously worked.

The experience itself was sexy AF, but after that first night things pretty much went back to normal. In the weeks since, we've had our fair share of amazing, emotionally-connected sex, but we've also had nights where we've fallen asleep without so much as a little hand action. So can I honestly say that the treatment permanently changed our sex life? No. At least, not in the way we expected.

We haven't been having sex more often—that one's on us—but every time we have had sex, the emotional connection is, as promised, stronger than ever. The totally-out-there (and really, really expensive) treatment got us to realize we needed to address the issues in our relationship instead of relying on some "miracle massage" to fix them.

So while the treatment probably did not bond our chakras (sorry, Gwyneth), it did get us talking—mainly about the fact that we'd become desperate enough to think something like a couple's massage might actually work. Bonding over the insanity of the whole thing made us better communicators ("WTF were we thinking?!" is now the refrain when we recount the story to friends), which has improved our relationship—and our connection between the sheets—overall.