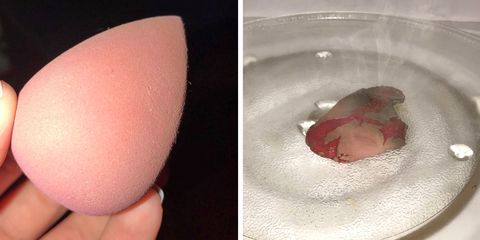 Every few months, the same OMG-worthy revelation surfaces on social media: You can clean your Beautyblender in the microwave. This viral epiphany is as constant as the sun in the sky, or rain on the day you straightened your hair—someone discovers the hack and posts about it, the internet gets excited, someone fucks it up, the internet gets even more excited, and the cycle begins again six months later.

And it looks like we’re officially at that six-month mark again, because Twitter was a-frenzy this morning after user @Jaycoko_ tweeted a video of herself cleaning her Beautyblender, with the caption, “LADIES I PUT MY BEAUTY BLENDERS IN THE MICROWAVE FOR 1 MINUTE AND LOOK WHAT HAPPENED.”

LADIES I PUT MY BEAUTY BLENDERS IN THE MIRCOWAVE FOR 1 MINUTE AND LOOK WHAT HAPPENED 😭😭😭😭♥️♥️♥️ pic.twitter.com/iT0448Mctq

The video, which has been re-Tweeted 28,000 times since yesterday, shows @Jaycoko_ microwaving her dirty Beautyblenders in a cup of soapy water for one minute, then showing off their clean, brand-new state afterward. “I actually cannot believe this,” she says in the video.

Naturally, the Twitter world freaked out. “Just tried it; it works…thank youu,” wrote one user, while other users showed photographic evidence of their successes, writing “Oh my god,” and “Honestly, I’m shook.”

“I’m deleting Twitter. I’m pissed. Wtf” reads her comment, right above a photo of her sponge steaming, cracked, and melted in the microwave. “OMG ur supposed to put it in soap [sic] water,” wrote the original poster. Which, clearly, she didn’t do.

Thankfully, the sponge didn’t catch on fire or melt the inside of her microwave, but, hey, that’s the risk you take when following random beauty hacks on the internet.

I will say, however, that I have personally tried this trick and it does work—when followed correctly. Just submerge your dirty Beautyblender in a bowl of soapy water, microwave it for 60 seconds, then rinse them off. It shouldn’t be that easy, and yet, it is. Try it for yourself at home—but promise you won’t do anything you’re not supposed to do (like use a metal bowl, and, I don’t know, some lighter fluid). 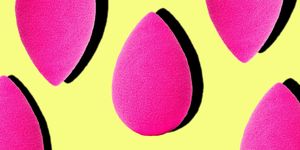 7 Ways You're Using Your Beautyblender Wrong
Chloe Metzger Senior Beauty Editor Chloe Metzger is the senior beauty editor at Cosmopolitan, obsessively writing about new makeup launches, the best hair products (curly girl here; whattup), and the skincare formulas that really work for every skin type (follow her on Instagram to see behind-the-scenes pics of that magazine life).
Advertisement - Continue Reading Below
More From Trending Beauty
Glitter Pumpkin Butts Are a Thing for Halloween
I Tested Meghan Markle's Top Beauty Products
Advertisement - Continue Reading Below
Behold: The Self-Tanner Fail to End All Fails
This Is Pinterest's #1 Halloween Makeup Idea
These 3 Products Cured This Woman's Acne
Princess Eugenie Just Dyed Her Hair Bright Red
13,000 People Swear By This Eye Cream
Post Malone Cut His Hair and Looks Unrecognizable
Shay Mitchell Will Only Use This One Concealer
People Are Freaking Out About Emma Stone's Hair