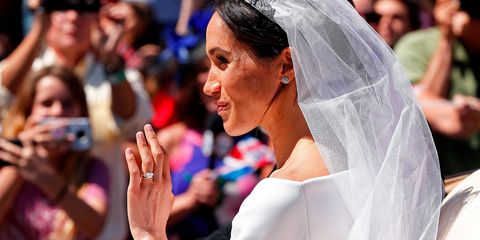 Welp, guys, Meghan Markle is officially a royal—or, to be specific, the Duchess of Sussex. And though rumors and speculation have run rampant for months as to how she would wear her hair or do her makeup, I wanted to know what she’d do with her nails.

Yes, it seems like such a minor detail, but when you consider the fact that the close-up shot of Harry and Meghan exchanging rings would be seen ‘round the world a billion times over, a manicure doesn’t seem so trivial anymore. And finally, her nails have been revealed: Meghan Markle choose a subtle, pale-pink polish for her neutral nail look.

Though we don’t have a confirmed nail polish shade or manicurist responsible, we do know that the Queen’s favorite nail polish is Essie’s iconic nail polish in Ballet Slippers, which she’s been wearing since 1989, when her then-hairstylist sent her a bottle of the sheer-pink shade to try.

So perhaps Meghan took cues from the Queen (not a bad idea, tbh) and opted for the same shade, or maybe followed Kate Middleton’s lead and used the same Essie Nail Polish in Allure that she wore to her wedding in 2011.

We’ll keep updating this story with details as they come, so check back!