Today's Top Stories
1
PSA: Anthropologie Is Having a Sale All Weekend
2
Untangling Hair Bias
3
I Started a Company to Pay My Medical Bills
4
Doutzen Kroes Goes Behind the Scenes at Dior
5
The Best Friends Having Babies Together
Stocksy

If you've ever experienced even a tiny bit of frizz, you've probably been told by your stylist to try a keratin treatment (or Brazilian blowout, or smoothing treatment)—the "miracle" way to get smoother, shinier hair in just one appointment. If, you know, you’re into that ultra-sleek look.

But like most chemical-laden beauty treatments, keratin treatments are not created equal, nor are they meant for every hair type or texture. Navigating the misinformation on salon websites and Yelp reviews can be completely overwhelming. So to clear the air before you commit, I went to the experts to find out every single fact you absolutely need to know.

1. Know What You're Asking For

If the terminology is confusing to you, you’re not alone. "People use different names for different treatments interchangeably, which is just incorrect," says Meri Kate O'Connor hairstylist and colorist at Eva Scrivo salon in New York City. "You either have your traditional keratin treatment, commonly called a Brazilian blowout, which really straightens out your hair texture,” she says, “or you have your smoothing treatments, like Goldwell Kerasilk and Cezanne, which help de-frizz hair and add shine, without disrupting its texture.”

Basically, if you’re happy with your waves and curls but would love to cut down on frizz (and loosen your texture a bit), try a smoothing treatment. If you want your hair to look flat-ironed straight, go for the Brazilian blowout.

2. Understand What You're Getting

Yes, all of the hair-smoothing treatments do involve the use of the protein keratin (which explains why people lump them all under the umbrella of "keratin treatments"), but keratin isn't really the hero of these smoothing treatments—the other ingredients are.

"A traditional keratin treatment aims to straighten the hair and usually involves a formaldehyde-releasing solution," says O'Connor, noting that your stylist will saturate your hair with the solution for 20 minutes—"it basically coats your hair cuticle like armor"—before blow-drying it and methodically flat-ironing it. "The entire process, when done correctly, will straighten out your hair texture and completely eliminate frizz for up to three months," she adds.

"Smoothing treatments, on the other hand, are formaldehyde-free and deeply permeate the cortex of your hair, rather than sit on the outside of your cuticle, to smooth your hair," she explains. Though the application process is similar, the formula isn't as potent (formaldehyde is key for that flat-ironed look), so don't expect it to straighten your hair. "It will, however, last longer—generally anywhere from four to six months," says O'Connor.

3. Be Prepared for Some Questionable Chemicals

Sorry, but organic, natural, safe-enough-to-eat hair-straightening systems simply don't exist. If you want to smooth your frizz and straighten your hair texture, you need to accept that your hair will be doused in some chemicals that may or may not be FDA-approved. And if you want to take your texture from coarse and curly to flat-iron straight, you'll need some formaldehyde—which, yes, has a pretty bad rap.

The perfect hair transformation for #transformationtuesday 💁🏼‍ Tame your curls this summer with a Cezanne smoothing treatment! #cezanneprofessional @mrkbeauty @salononlysales

"According to the EPA, formaldehyde is a carcinogen that could possibly cause respiratory problems if exposure is frequent," says Brenda Kamt, colorist and keratin specialist at 454 North Salon in Los Angeles. Even if you opt for formaldehyde-free options, there’s a chance the chemical may still be present in a straightening treatment.

"Formaldehyde isn't actually a single ingredient—it's a gas that's emitted from other chemicals being exposed to heat," explains Kamt. "So technically, a product can say it's formaldehyde-free, but still contain the ingredients that create the gas."

Don't let this completely deter you, though, because "if you're only getting the treatment done three times per year—and I definitely wouldn't recommend more than four—the risk is very minimal,” she says. “Make sure you're having the process done in a well-ventilated salon, or, even more ideally, with windows open or outdoors.”

Check out this before and after! Brazilian blowouts are no joke! If you’re looking to achieve silky smooth hair this is for you! Cuts your style time in half! #Lovewhatyoulearn #brazilianblowout #Blowouts #hair #stylists #colorists

4. You've Gotta Be Okay with Some Sacrifices

Sorry, but depending on which treatment you get, there’s some downtime involved. "If you get a traditional keratin smoothing treatment, you can't really touch your hair for three days afterward," says O'Connor. "You can't clip it back, you can't put it in a ponytail, and you can't wash it, or you'll risk denting it."

If your hair is colored, you run the risk of some minimal fading or lightening after the treatment, though both experts swear it isn't that common. "Although it depends entirely on the keratin line you're using, you might experience some very slight lightening—like, less than a shade—of glosses, toners, or any demi- or semi-permanent colors," says Kamt. "This is mainly due to the use a clarifying shampoo prior to the keratin process, which is used to remove residue from hair, but may also remove some color."

5. Accept That Results May Vary

Because life is unfair, etc., there's no way to guarantee the results of a keratin treatment on your hair, regardless of which one you try. "In theory, a traditional keratin treatment should straighten even pretty tight curls, but I've seen women end up with slight waves that they still need to flat-iron," says O'Connor. "I've known women whose curls were totally unaffected by smoothing treatments, while others saw their curls loosen to waves."

It all depends, says Kamt, on how strong the treatment is, how it was applied, what the temperature of the flat-iron was, how porous your hair is, and about a zillion other factors that you really can't control. But don't let that freak you out. "Just do your research, read a ton of reviews, talk openly with your stylist about what you do and don't want, and try not to stress too much," says O'Connor. “After all—it'll wash out in a few months, anyway." 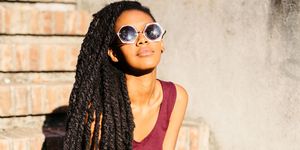 Your Guide to Extensions for Kinky Curly Hair
Chloe Metzger Senior Beauty Editor Chloe Metzger is the senior beauty editor at Cosmopolitan, obsessively writing about new makeup launches, the best hair products (curly girl here; whattup), and the skincare formulas that really work for every skin type (follow her on Instagram to see behind-the-scenes pics of that magazine life).
Advertisement - Continue Reading Below
More From Best Hair Products of 2020
Why Deep, Dark Brunettes Should Try Green Shampoo
The Best Volumizing Products for Fine Hair
Advertisement - Continue Reading Below
Try These Editor-Approved Shampoos & Conditioners
The 9 Best Products Ever for Short Hair
The Perfect Hair Mask For Your Hair Type
The Best Natural Hair Products of 2019
Emma Roberts Went Back to Being a Brunette
8 Oils That Will Make Your Hair Grow Crazy Fast
Found: The Best Mousse for Your Hair Type
The Best Temporary Hair Dyes to Play With ASAP