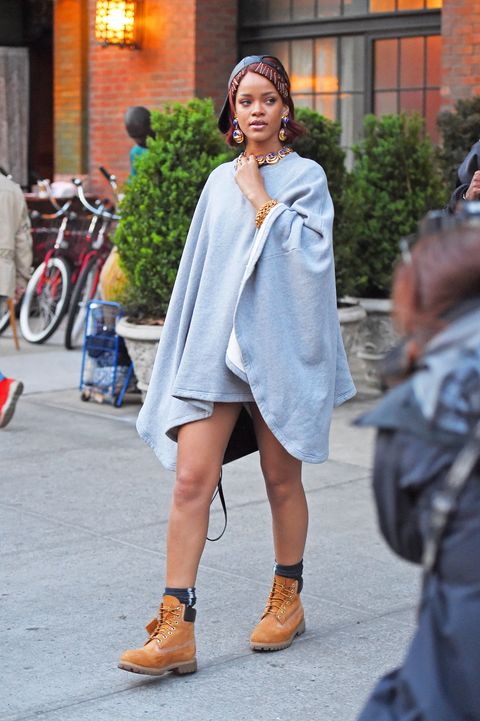 Update, 5/5: Another major leap for morning-after hair, RiRi stepped out the day following the Met Gala donning the exact pin-happy 'do she sported at the after-party bash she hosted.

And just like Bey, she changed out of her formal night-of outfit—a barely-there, sheer plume top and trousers—into something on the other end of the dress code spectrum: a gray jersey blanket poncho, leather baseball cap, and Timberland boots. But true to next-level form, she topped off the casual look with opulent gold costume jewelry.

Original Post, 5/6: The day after a formal event, our once perfectly-coiffed hair is a hot mess—rumpled waves, rock-hard texture, and bobby pins poking out every which way. But in the latest finding supporting the claim that Beyoncé is, in fact, superhuman, we have proof that she kept that epic, ultra-high blonde ponytail she wore to the Met Gala in tact for the next 24 HOURS.

Last night, she stepped out in New York City rocking the Croydon facelift-like side pony—decidedly more dressed down than she was in her bejeweled,side-butt-showcasing Givenchy Couture bodysuit look—wearing a cropped white jacket, embellished Guns N' Roses T-shirt, distressed denim, and red pumps.

While a major beauty feat, it's also proof that Bey, too, has a lazy-girl alter ego that has no qualms about recycling yesterday's look because whatever. We're fully inspired to keep our fancy styles #flawless for as long as possible—even when we're in our trusty T-shirt and jeans uniform. (Who knew it could look that good?)

Also, just so we can say we told you so, we're totally predicting that Bey brings the '80s-inspired, Material Girl-esque ponytail back into fashion. And you thought it could never be done...

Beyoncé's Anti-Aging Secrets Are Now Yours for the Taking

The Beyonce Quiz: Which Beyoncé Are You?

Lauren Valenti Associate Web Editor I’m the associate web editor at Marie Claire.
This content is created and maintained by a third party, and imported onto this page to help users provide their email addresses. You may be able to find more information about this and similar content at piano.io
Advertisement - Continue Reading Below
More From Beauty
Crest's Cult-Favorite Whitening Strips Are On Sale
Marie Claire Editors Share Their Favorite Mascara
Advertisement - Continue Reading Below
This Techy Rotating Curling Iron is On Sale
The Brow Growth Serums That Really Work
The Best Editor-Approved Lip Scrubs
FOREO's Game-Changing Brush is on Major Sale
Revlon's Cult-Favorite Brush is on Major Sale
Your New Favorite Retinol Is Made From Caviar
24 Hours With Diipa Büller-Khosla
Give Your Curls the Gift of a Diffuser