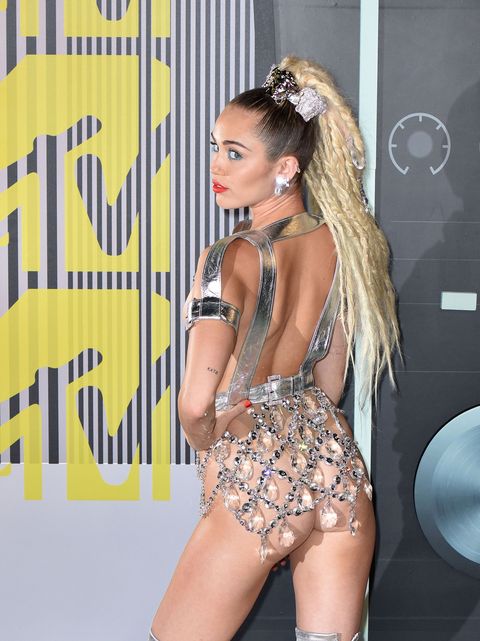 Update, 8/30/15: Given that Miley Cyrus is always at ease in the nude, it's no surprise that the pop star embraced the side-butt trend with open arms, or err, hipbones. Last night at the VMA's she put what her mama gave her on full display in a silver, bejeweled, and futuristic onsie created by Donatella Versace herself.

Update, 7/7/15: Side-butt wasn't just on display on the Versace runway, but in the front row as well. Nicky Hilton arrived for the show wearing a mini-dress with cut-out stripes that revealed...well...pretty much everything. Does this make 2015 the Year of the Butt, Redux?

Update, 7/6/15: As one of our editors pointed out, the ethereal, fairy-worthy gowns that floated down the Atelier Versace runway in Paris yesterday weren't *quite* as naked as those we saw during the 2015 Met Gala, but let's be clear: there was side-butt and lots of it.

Donatella Versace's asymmetrical, corseted gowns veered into sultry territory thanks to their major thigh cut-outs, which had so much red carpet appeal, Karlie Kloss, who modeled one of the gowns on the runway, wore the design just hours later for a high profile AmfAR dinner.

And as if that wasn't enough to make the trend runway official, earlier today it got the Dior stamp of approval from Raf Simons. The flash of side flesh caught the eye of idiosyncratic fashion blogger Susie Bubble, who snapped the detail gram from her front row perch.

Needless to say, derrière-centric workouts have never been more appealing.

Original Post, 5/3/15: Side-boob, you've had a good run, but with this being the year of the butt and all, you really should've seen this coming.

Dethroning the alternative cleavage statement is none other than the side-butt, which was put on full display last night night at the Met Gala by three of the biggest players in the derrière game: Jennifer Lopez, Kim Kardashian, and Beyoncé. Each wore a dress that highlighted strategic slivers (or, um, whole sections) of rear-end skin that were beyond just suggestive—they were on-the-nose salacious.

Now, it's true that Gwyneth Paltrow has been a pioneer of the look since she wore that sheer-paneled, side-butt-revealing Antonio Berardi gown to the premiere of Iron Man 3 in 2013. And since then, there's been a parade of cleverly cut-out numbers pushing boundaries. But what caused a stir back then pales in comparison to what's happening now.

For evidence, take a closer look at last night's triad of side-butt devotees.

We've seen Queen Bey pose and there's no secret she's a master—but as evidenced above, her technique took on a life of its own in this embellished crystal Givenchy number. She celebrated her curvaceous physique from every angle, but jaws dropped when she tossed her super-high ponytail to the side and showcased her decidedly pert posterior.

An advanced naked dresser and backside poser, Kardashian's Cher-inspired, custom Roberto Cavalli gown by Peter Dundas was a perfect vessel for letting her curves shine. Her side-view hybrid of the hard-to-master, over-the-shoulder pose is a lesson for us all.

Ms. Booty herself has been doing her thing since the '90s and last night she reminded us that she could teach a masterclass in showcasing what your mama gave you. Her beaded red Versace number boasted a side-butt cut-out that makes Paltrow's look utterly conservative. Sorry, Gwynnie!

See Every Look from the 2015 Met Gala

The Year of the Butt: How to Get What They've Got

The Evolution of the "Naked Dress"

This content is created and maintained by a third party, and imported onto this page to help users provide their email addresses. You may be able to find more information about this and similar content at piano.io
Advertisement - Continue Reading Below
More From Fashion
Found: Our New Favorite Pajamas
The Winter Trends to Start Investing In Now
Advertisement - Continue Reading Below
Your Back-to-Office Style Guide Is Here
Anya Taylor-Joy Was a High-Fashion Princess
Kathryn Hahn Is Dressed to Perfection
The Best Red Carpet Looks at the 2021 Emmys
Dior Photography Award Winner Shares Inspirations
We're Living for This Blast-From-the-Past Fashion
The Leggings You Want When the Weather Gets Brisk
Emily Blunt Is a Modern-Day Ziegfeld Girl