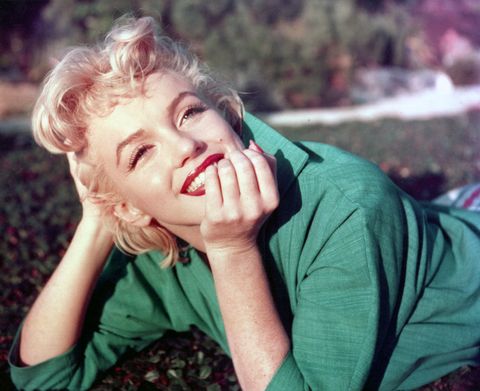 Long before the days of Kim Kardashian and Mario Dedivanovic, there was her most-famous-woman-in-the-world predecessor, Marilyn Monroe, and the man behind her famous visage: Allan "Whitey" Snyder.

The pouty red lips. The swooshy lashes. The technicolor-worthy glow. Yes, that was all Whitey, and it wasn't just Monroe he counted among his clientele—Katharine Hepburn, Doris Day, and Raquel Welch were all among his coterie. And if these women trusted Snyder with their million-dollar faces, we want every trick in his book. Here are some of his best-kept secrets, ready for the stealing.

1. Use vaseline as a primer and highlighter.

While trading in your featherlight moisturizer for petroleum jelly is a perplexing premise, this was always Monroe's base before applying her foundation. She loved it because it was ultimate moisturizer, and to her moisture was the essence of youth. Plus, combined with her signature peach fuzz, it gave her a soft focus glow under the studio lights. Snyder would also use the jelly as a highlighter, applying it to the cheekbones and brow bones for sheen.

In pursuit of a naturally plumped-up pout, we tried this ourselves using Snyder's signature technique: darker reds on the outer corners and lighter shades in the middle to add dimension. Then, we topped things off by using highlighter on the cupid's bow and bottom lip. For an easy step-by-step, see our story here.

3. Swipe on a drop of oil for glistening lids.

Whether it's a dab of Vaseline or drop of coconut oil, Monroe was a firm believer that shiny lids were sexy. And thus, Snyder would dab some onto her lids for a subtle, wet-look finish.

4. Use the Greta Garbo's eyeshadow trick.

Monroe literally called it the "Greta Garbo eye," as the silent screen star was the one who originally blended white eye shadow on the lids all the way up to the brow bone and into the inner corners to add more depth.

5. Mix a combination of black, brown, white, and red eyeliners.

For quick, everyday slashes of eyeliner, most women are either brown or black pencil kinds of girls. But Snyder used a combination of both on Monroe, using Elizabeth Arden's classic eye pencils in both hues. He applied liner to her upper lids and waterlines, extending the lash lines with wings to elongate.

6. Use blush to contour the nose.

While we're well-versed in the art of using blush to contour our faces, it was Whitey who did it first. To shape Monroe's nose, he would tap a little bit of the pinky blush he used to contour her cheeks on the tip of her nose. The results? The illusion of shorter, more defined nose.

7. Cut your false eyelashes in half.

Monroe wanted her lashes longer and more voluminous with help from fringy falsies, but with natural-looking results. Therefore, Snyder would cut her false eyelash strips in half and apply them only to the outer corners of her eyes.

8. Shape your eyebrows with peaks.

While eyebrows shape is a very individual characteristic, if you want your arches to channel Monroe's, make like Whitey by drawing in peaks, which Monroe believed helped minimize the wideness of her forehead. But be careful—you don't want them to appear too sharp or pointy.

Lauren Valenti Associate Web Editor I’m the associate web editor at Marie Claire.
This content is created and maintained by a third party, and imported onto this page to help users provide their email addresses. You may be able to find more information about this and similar content at piano.io
Advertisement - Continue Reading Below
More From Beauty
A Definitive Guide to Essential Oils for Your Skin
For Sharon Chuter Self-Care Includes Champagne
Advertisement - Continue Reading Below
The Absolute Best Red Lipsticks on Earth
Our Favorite Self-Tanners for Dark Skin Tones
Top-Rated Dip Powder Nail Kits to Experiment With
Go Platinum Blonde Without Destroying Your Hair
Tried-and-Tested Skincare Products That Work
Shizu Okusa﻿ Swears by Forest Bathing
Eye Creams That Work Wonders on Puffiness
Editor-Approved: The Best No-Streak Self-Tanners