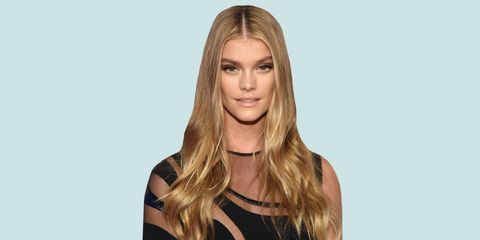 When you meet Nina Agdal, it's abundantly clear that she's hit the genetic lottery. That's probably an understatement. But if it makes you feel any better (grasping at straws here, I know), she works to maintain what she's got. And, despite her superhuman looks and being wooed by the-most-famous-bachelor-in-the-world Leonardo DiCaprio, Agdal is refreshingly down-to-earth.

We learned as much when we caught up with her over the weekend at the Buick Studio Envision headquarters in East Hampton. From the perils of birth control to the complications of the morning-after, before-he-wakes-up face beat, chatting with 24-year-old Agdal is like having a much-needed tête-à-tête with an old girlfriend. Unfiltered and let's-order-another-round easy. You almost forget she's dating your boo boo.

Here, the Victoria's Secret Angel and Sports Illustrated cover girl gets real on working out, the Olympics, highlighting, fake tans, and why you should never wear makeup for a guy.

Marie Claire: Tell us about your partnership with Buick!

Nina Agdal: We worked together on a commercial, which focuses on beauty inside and out. And I'm all about wellness, so it was a natural fit.

NA: I personally love working out, but I always try to switch it up. I do a few different things, like SoulCycle, SLT for Pilates, yoga, and then there's my sessions with my personal trainer Andy and boxing trainer Eric.

"Working out gives me mental stability, honestly. If I don't do it, I feel crazy and I can't go to sleep. I'll get anxiety."

MC: Damn. How often do you work out then?

NA: I work out at least once a day. If I'm not working, I'll work out three times a day. I do it because I enjoy it. It's a way of living and it makes me relaxed. It gives me mental stability, honestly. If I don't do it, I feel crazy and I can't go to sleep. I'll get anxiety. So it's something I love to do.

MC: Are ever just like "F*ck it," and let yourself be lazy?

NA: Um, if I'm on vacation. And it's hard when you're traveling to keep the routine because you don't have the studio or trainers. But even then, I'll try to substitute it with a beach boot camp, beach run, or even just biking around. I'm always trying to do something active because I love it.

MC: Have you been watching the Olympics?

NA: I actually don't have a TV and I've been traveling so I've missing out on a lot of stuff. I went to a local pub a couple of days ago with my girlfriend just to watch the swimming and it was amazing. Michael Phelps is a beast. He's like a human fish. It's really impressive.

MC: You're perpetually on the go. How does that effect your beauty routine?

NA: I don't really wear a lot of makeup, but before I get off an airplane, I use some Laura Mercier Foundation Primer in Radiance, and I just love it. It instantly makes your skin look glowy and dewy, which I personally love. Then, a little concealer, curling the lashes, and some mascara. That's my go-to. I normally do that on the plane before I walk off and that's it.

MC: You spend so much time working out. Do you wear makeup then too?

NA: I do wear makeup when I work out. I am one of those people. It sounds stupid, but I can't really get motivated if I don't have a mirror and I'm not staring at myself because I need to look at myself. I'll see an area that I'm not happy about, everybody has one, and I'll just work harder and bust it up. So I like to keep my face "pretty" because then I won't be like oh my god, what are you doing here?

MC: So a fellow editor wrote a story recently about how there are kind of two types of women when it comes to makeup at the beach. There's team natural and team full face beat. Which camp are you in?

NA: Team natural. On the beach, I'm definitely team natural. I mean, a good tan when the freckles are popping and some saltwater hair, I think that's super hot. So, I'm all about the natural on the beach.

MC: And what about sun protection?

NA: Always, always, always. When I was younger, I used to put honey and Coca-Cola and all that stuff on my body and just fry in the sun. But I think we all know how bad that is for you. When you're younger, you don't believe in it, but it's really so important to stay out the of sun as much as you can. Like if you wanna get tan, you can get a spray tan and not get skin cancer.

MC: It's the best. So you're big on spray tanning?

NA: Yes! I mean, this is real [points to body] because I was in Mykonos and like, I wasn't not gonna tan. It was the most gorgeous place ever. But besides that, I don't tan in New York City. I don't want to waste it on that. I'll do my own fake tan, actually. It's awesome.

MC: What do you use for a faux tan at home? It gets a bad rap, when it's actually so easy and convenient with the right product and technique.

NA: I use St Tropez, the bronzing mousse. I'll take a shower to make sure I'm all clean, then just rub it all over, even my face, with a little glove. If you can reach your back, great, if not, have somebody help you. You go to sleep— sleep on some sheets you wanna wash or a towel—and rinse in the morning. Then you're good to go.

MC: What's the best beauty secret you've picked up coming up in the industry?

NA: I use rosewater a lot. I don't remember who taught me that, but that's my number one thing that I always use on my face and all over my body. And less is more. I think that if you try to put too many beauty products on, you're probably gonna get used to it. Your skin is not supposed to be covered with a bunch of stuff, so I think that less is definitely more. And try to go organic with not too many chemicals and stuff in it. That's what my mom always told me. She was like, "If you wanna wear makeup or do anything, try to keep it organic."

MC: Are there any trends or techniques you're excited about as of late?

NA: I love highlighting. A good highlighter works on everyone. I like the NARS one, and my friend Tracy Murphy is coming out with her own. It's not powder, it's not liquid. It's like an in-between and you just pat it on your cheekbones and the tip of your nose. It's gorgeous. And contouring is like my favorite thing ever because you can get cheekbones even if you don't have them.

"As a woman, birth control can really mess you up. I just started breaking out and as soon as I got off it, my skin was completely clear again."

NA: As far as taking care of your skin—are you mindful of what you eat and drink?

MC: With skin, I really believe it has a lot to do with your genes. And I've been really lucky. But honestly, as a woman, birth control can really mess you up. Like, I switched and it completely messed me up—not completely, but I just started breaking out and as soon as I got off it, my skin was completely clear again.

MC: Had you ever broken out before?

NA: Never, never. So I was freaking out. I had my first pimple and I was like, what is this? I didn't know what to do with myself. Now it's all gone, but it's so weird, what you put inside of your body.

MC: The perils of being a woman sometimes...That said, it's such as amazing time for beauty because every woman is embracing what they want to do, experimenting and using it to express themselves. But when you're dating, you can be conflicted—do I want to present my authentic, no-makeup self, because that's who I am ultimately, or head out on a first date with a face full of makeup because it makes me feel good? How do you strike a balance?

NA: Oh yeah—I've done that thing where you wake up beforehand and you put on a full face of makeup, and he actually caught it. He was like, "Did you go and put makeup on your face?" and I was like, "Yeaaah." He was like "You don't need to do that."

"Natural is better. Confidence is sexy. So if you're confident in who you are, that's sexier than anything."

MC: Ugh, yeah morning light isn't *the best*, but it should never be that way!

NA: We're really hard on ourselves and just need to relax more. A lot of guys really prefer you more natural. That's from experience. When I was younger, I was like full eyeliner, tons of mascara, blush, and a red lip thinking, Oh, this is sexy. And now I think natural is better. Confidence is sexy. So if you're confident in who you are, that's sexier than anything.