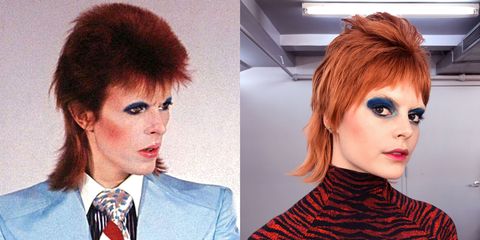 No matter what incarnation, dressing up as David Bowie is all or nothing. You don't half-ass Starman. The devil is always in the celestial details.

So when I decided to do my own interpretation of Ziggy Stardust this year, I wanted to execute it with great precision—but, in true ever-evolving Bowie fashion—express myself while I was at it.

Marrying obsessive research with my own penchant for far-out beauty and style, here's what I learned is essential to becoming The Thin White Duke.

1. You need to make your brows disappear. Step one to becoming an androgynous alien rock star? Shave your brows—it makes your practically unrecognizable. While I will do many things for the sake of art, I'm not that bold…so I bleached them instead. I visited Larry Raspanti at Whittemore House, the go-to salon for color backstage at Marc Jacobs and Alexander Wang.

Raspanti used Whittemore House Hair Paint, a natural lightening powder, on my thick, dark brown arches for 30 minutes. After they turned a bright, yellowish white, he toned them down with a demi-permanent stain for a translucent effect. Then voilà, they were as good as gone.

2. The flame-hued mullet is also a must. Bowie's signature hairstyle was the brainchild of himself alongside Suzi Ronson, a 21-year-old hairdresser who loved rock 'n' roll. (At the time, it was uncommon for a woman to cut a man's hair.) The pair was inspired by a model for designer Kansai Yamamoto, and the rest is history.

Because my hair is naturally curly, the mullet is not something I could commit to permanently. The same goes for the orange-red hair dye. So I went to Bumble and bumble's downtown salon where their stylists transformed a long, blonde human hair wig. Since there was no heat from the scalp, Bb.colorist Luis Ayala used a more intense dye than normal to acheive Bowie's signature shade. Then, stylist Mischa G created the layered, high-low 'do with thinning sheers for a soft, feathered cut. She styled the wig with a blowdryer and lots o' Bumble and bumble Bb. Strong Finish Firm Hold Hairspray.

3. Your face needs to be lit, in every sense of the word. When conceptualizing a makeup look, a 1973 article in Music Scene entitled "David Bowie's Makeup Dos and Don'ts" came in handy. One of my biggest takeaways was that Bowie loved highlighter just as much as the Instagram generation…if not more.

"For stage, David will often use an iridescent base, usually pure white," the magazine reports. "Once in awhile he uses pearlized gloss on his lips in a tan/pink that comes across like a white-silver highlight."

For extra shine, Bowie would look to Elizabeth Arden's Eight Hour Cream. According to the article it's "what you'll see shining up David's lips and eyelids in photographs, it gives that extra-gloss effect."

4. You must contour your face like it's never been contoured before. "He has the perfect face for makeup," explained Pierre LaRoche, Bowie's makeup artist, in 1973. "He has even features, high cheekbones and a very good mouth." Because of Bowie's naturally pronounced bone structure and super-svelte physique, contouring was one of the most important aspects of achieving his look.

Obviously, this was a job for a seasoned pro, so I looked to Make Up For Ever artist Alice An, who not only shadowed my entire face, but then draped my blush à la Bowie for even further sunken-in cheekbones.

5. The eyes have it. The way I see it, with his glam rock aesthetic, Bowie rocked '80s makeup in the '70s. In addition to statement blush, he also loved painting different shades of blue around the eyes and adding dimension with metallics.

This could be best scene in his "Life On Mars?" music video, which is what we worked off of for the beauty look in its entirety.

"David will often paint waves of color all the way across his eyes and eyebrows, rather than on the lids only," revealed Music Scene.

6. You can put your own spin on his style. At first I had my heart set on recreating one of his costumes to a tee, but that was proving challenging. Thankfully upon attending the magical theatrical production that was the Kenzo x H&M runway show, I fell in love with one of the looks: A red-and-black, zebra-print skintight turtleneck and skinny pants set. It screamed Bowie to me—especially because he was so partial to Japanese design.

To accessorize, I paired the getup with a steel blue feather boa and Jeffrey Campbell's silver lace-up platform "Avenger" boots. Jewelry-wise, I had an ear cuff with crystal stars going down the side in one ear, and then two spider-shaped studs with red rhinestones for the Spiders from Mars.

Like some cat from Japan 🇯🇵🏮🎋 Bowie worshipped Japanese design and when I saw this electric zebra look come down the #KENZOxHM runway, I knew it was the one ⚡️⚡️⚡️ 📸 by @joseph_pollard (thank you for this serendipitous snap) #halloween2016 #davidbowie #ziggystardust

7. You need to top things off with talons. Bowie loved nail polish, painting his digits everything from shimmery gold to metallic navy. When I realized that one of my favorite songs of his, and all time, "Rebel, Rebel" would spell out perfectly on each of my hands, I ran with it. I showed a nail artist at Vanity Projects the red, white, and blue cover art and she ran with it. It sealed the deal.

Lauren Valenti Associate Web Editor I’m the associate web editor at Marie Claire.
Advertisement - Continue Reading Below
More From Beauty Advice You Need Right Now
Why Argan Oil Is Your Skin's New Secret Weapon
Why You Should Be Using Chemical Exfoliants
Advertisement - Continue Reading Below
8 Best At-Home Laser Hair Removal Devices
Why You Should Switch to a Water-Based Foundation
10 Gorgeous Just-Got-Back-From-Vacay Bronzers
How to Get Rid of Your Broken Capillaries ASAP
These Mascaras Will Double Your Lash Volume
The Fall Makeup Essentials You Need Now
I Got Clip-In Bangs and They Changed Everything
Does a Coffee Habit Cause Dull, Dehydrated Skin?