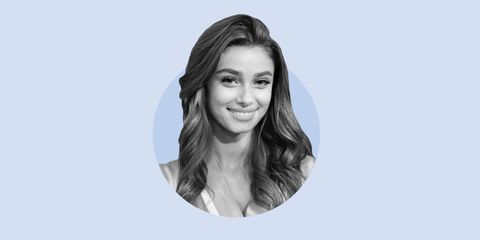 With three Victoria's Secret fashion shows under her belt at the ripe old age of 20, you'd think Taylor Hill such a natural that she's surely gotten over the whole nerves thing. But nope, she's only human and does, in fact, get pre-catwalk jitters. We learned as much when we caught up with Hill less than 48 hours before the 2016 show, which is hitting Paris for the first time ever at the Grand Palais.

From the new grand locale to the fact that over 500 million people worldwide are expected to tune in, there's no denying that the pressure is on for Hill and her fellow Angels. But from commanding the VS runway to hitting the slopes snowboarding in her native Colorado, fear has always been a non-issue for Hill.

Here, we chat with the model about all things Victoria's Secret, her five-minute face beats, mentoring her younger model siblings, and more.

Marie Claire: The Victoria's Secret show is major no matter where it is, but there's something extra special about this year in Paris, no?

Taylor Hill: I mean, it's Paris. It's the fashion capital. We all come here twice a year for Paris Fashion Week and we're here for 10 days. It's the longest one with the most shows, so when I'm here I'm in that mindset. It feels right that it's here. It's about time.

MC: Speaking of Paris Fashion Week, the Victoria's Secret runway is such a departure from other fashion shows. How would you describe the difference in your approach on the catwalk?

TH: It's a night and day difference. High fashion is so...not serious, but you know, it's self-explanatory. It's about the clothes. And then the Victoria's Secret show is about the girls too and how hard we work out to be fit. You kind of get a little bit more attention cause it's also about you. And it's televised! We're the only fashion show in the entire world that's on TV. So it's just a different world!

MC: This will be your fourth show. Has it gotten progressively easier nerves-wise? Or does it always feel like the first time?

TH: It kind of feels like the first time still. I mean, I'm a very calm, go-with-the-flow kind of person about stuff until the last possible second because I'm a procrastinator. Then I finally realize oh, wait I'm here, what?! And I freak out. But I try to not get in my head about how scary it's going to be or about falling. I'm kind of oblivious. I'm like, I'm having fun. I'm with all my friends. It's more like that for me.

MC: Is there anything that you guys do together to kind of psych yourselves up?

TH: Screaming, dancing, and just having a good time. We work together all year long, so we're such a tight group, you know? Like best friends. Sometimes it just feels like every other day and we're just amping each other up because we're all just full of energy.

MC: Totally. Do you have a most favorite Victoria's Secret runway look to date?

MC: Totally one for the books. And what about a look you've worn?

TH: I've only had three. They're all so different. I was in VS pink for my first year, so that one was super special. And then last year, I opened the Pink section in the American flag look. Then, I wore my first outfit as an Angel in the boho-psychedelic look. Ask me in like five years and I'll tell you what's my favorite because right now I only have three and they're all my favorite. [Laughs]

MC: Fair, fair. So in the days leading up to the show, what are your pre-show rituals?

TH: I think you need to take care of yourself, making sure you're eating, drinking a lot of water, and doing the things you need to do fitness-wise. You know, some crunches and a few butt exercises to pump things up. Oh, and scream a little bit. [Laughs] Those kind of things. I'm not super military strict about it, but I do the little things that I know will make me feel a bit better about it.

MC: Totally, because it's more about your state of mind than anything. So, music-wise the show has The Weeknd, Bruno Mars, and Lady Gaga as its three acts. What song are you most excited to hear on the runway?

TH: I'm so bummed I'm not in that segment because I really love that song. The first time I heard it, I was jamming out. It's going to be so cool. I can't wait to watch that.

TH: During the day it's more like just mascara, a little concealer, and lip balm. At night, if I do go out with my friends, or go to a nice dinner, then I just put on another layer of mascara on, or maybe a cat eye.

MC: So you're a fan of the five-minute face versus the Instagram face beat.

Omg high FIVE to all 5m of you!! I ❤️ you all and I couldn't be here without you all!! Thank you for the continuing support it means the world to me and I can't wait to share more adventures with everyone 😊💜🙈🎉

MC: Like the Hadid family, your brother and sister are models too. It's becoming a family affair. How exciting is that for you?

TH: They just started and it's so much fun! I've been doing it for six years and they just started six months ago. So I can't wait for them to establish their careers and start coming up. My hope is that we can work and do jobs together. Because you know, I always miss them so much when I travel. I'd only see them like once a month or during the holidays. Now they live in New York and are going to start doing fashion week. We can do it together!

MC: We're calling it—you guys are going to be the next model fam!

TH: I hope so because they're so beautiful and great kids even though we're only a year apart from each other. Don't tell them I said that. [Laughs]

MC: But seriously, six years is a long time in this business. What kind of advice do you impart to them?

TH: Just to be confident. People like personality and they want to know who you are. Also, just stay on that social media game. Like, you've got to stay consistent and post your work. It's now a huge part of the industry and it's made a huge difference in my career. I always tell them that and have fun, because in fashion there can be so much rejection. If you take it too close to heart it can be quite lonely. So it's like, I'm here for ya!

Baby it's cold outside ❄️

MC: Social media really has been a game-changer. What do you feel has helped grow your following the most?

TH: I always try and keep it very candid and spontaneous. I'm not always on a schedule like I have to post something every single day. I kind of make it about my life. Like oh, I'm just chilling on the couch with my dog because I feel people want to know you. I always just keep it real, so it's kind of like an expression like that for me.

MC: Totally. And another thing we loved learning from it is that you're a snowboarder. Though we have to ask: Since keeping your body in one piece is kind of essential for your career, are you ever nervous to do it?

Lauren Valenti Associate Web Editor I’m the associate web editor at Marie Claire.
Advertisement - Continue Reading Below
More From Beauty
100+ Chic Haircuts to Add to Your Mood Board
Our Guide to Finding Your Perfect Nail Shape
Advertisement - Continue Reading Below
In Her Own Words: Halima Aden
Beauty Editors Share the Best Products for Acne
Easy Homemade Face Masks for Glowing Skin
#BigLipstickEnergy: The Cult Classics Edition
Editors' Picks: Face Rollers That Work
The Chicest Lobs That'll Look So Good on You
What to Buy at Ulta's 21 Days of Beauty Sale
The Best Eye Creams for Getting Rid of Puffy Bags