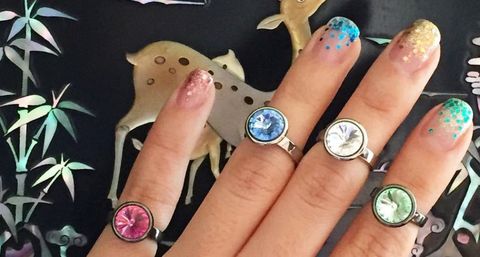 At the beginning of 2016, we had our first brush with glitter tears. Models at Burberry's Fall 2016 men's show sported drips of glitter 'neath the eyes hailed "tears of joy" as a tribute to the late David Bowie. Soon after, we saw It girls like Suki Waterhouse and Elle Fanning donning the same cascades of glitter on their under eyes. A year later, we're seeing the trend in #nailart form on the blinged-out hands of jewelry designer Marisa Jiwi Seok.

And whether it's an intentional take on the glitter tears trend or not, we're obsessed. A sprinkle of colorful glitter on the tips, with a few specks gliding down the body of the nail, it's equal parts chic and cool. Not to mention, flattering to the hands with all that negative space. Design-wise, we're loving how Seok chooses a different color for each nail to match her monochrome rings in one instance, then experiments with a mix of glitters in another.

But perhaps the the most enticing part of the look is how easy it is to D.I.Y.. Just grab clear nail lacquer, brush it onto the nails, then add glitter. For picture-perfect precision, we recommend using nail art tweezers, which can grab even the most minuscule pieces of the shiny stuff. Or, try your hand at dipping just the fingertips into small jars of glitter and letting the rogue sparkles fall where they may.