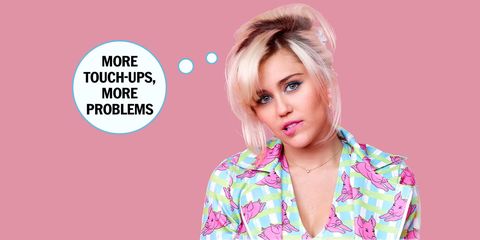 Miley Cyrus is no stranger to doing the unthinkable. So if anyone's going to dye their hair platinum blonde and let the ultra-dark roots grow out for seven months straight, it's her. In what's turned out to be one of the most convincing cases for rocking visible grow out, we present thee Cyrus' guide to throwing caution to the wind and NGAF about your roots.

March 30, 2016: After doing the dirty blonde thing for a while, Cyrus went full-blown platinum again.

April 29, 2016: In April, her dark roots began to creep in around the hairline, but not in an I-need-to-run-to-the-salon kind of way.

May 17, 2016: By May, Cyrus officially had rooty roots, which look great on her because they match her dark brows. As a rule of thumb, when you're rocking the light-hair-dark-brow look, the color of your arches should be as close to your natural hair color as possible or within two levels of that color.

Stage 4) You're in Limbo
Getty Images

June 12, 2016: As far as grow-out goes, a few inches in is when it's going to be the trickiest. It doesn't look bad per se, but it can look more like neglect than intentional. The dye job equivalent of growing out your bangs, when all else fails just throw your hair up into a top knot and exercise patience.

September 15, 2016: As of late, Cyrus has officially been rocking two-toned hair. The half-platinum, half-brunette look is the beauty equivalent of color-blocking your outfit—just a liiiittle more subversive and statement-making. One thing to note is that it leans more polished/purposeful when you style it in an updo, like Cyrus' wispy top knot.

September 16, 2016: Here, Cyrus goes retro by completely modernizing the '60s bouffant with her exposed roots (this would have been unthinkable in decades past).

Lauren Valenti Associate Web Editor I’m the associate web editor at Marie Claire.
This content is created and maintained by a third party, and imported onto this page to help users provide their email addresses. You may be able to find more information about this and similar content at piano.io
Advertisement - Continue Reading Below
More From Beauty
Dazzling Makeup Looks From the Spring Runways
Michelle Obama's MUA Talks Her Inauguration Look
Advertisement - Continue Reading Below
24 Hours With Nail Artist Naomi Yasuda
You Need This Kamala Harris-Inspired Lipstick
Acne Scars Are No Match For These Cult Products
Lengthening Mascaras for Your Longest Lashes Ever
Why Resoré's Body Towel Is Worth It
The Best Supplements for Glowing Skin
Hair Dryer Brushes Will Change Your Blowout Game
A Dermatologist's Guide to Ferulic Acid