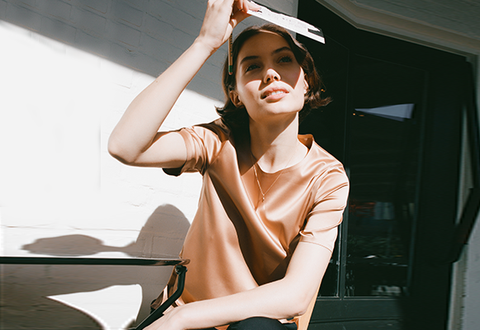 In the span of just over a month this fall, ADAY co-founders Meg He and Nina Faulhaber moved their company’s New York City offices, opened the brand's first-ever permanent retail store in San Francisco, and launched a new collection (inspired, fittingly, by travel).

For a clothing brand that’s made steady, thoughtful growth one of its hallmarks, this period marked an inflection point—one the founders worked hard to navigate while managing the company’s day-to-day operations. Even in this ongoing expansion phase, though, ADAY's mantra of “doing more with less” has been their guiding principle, they say, influencing everything from their marketing strategy to their forays into new categories.

In November, the brand debuted its first piece of outerwear, the Carry-On Coat, featuring its new Super Satin fabric, a stretchy, silk-like material made from recycled plastic bottles. Customers had been requesting outerwear from ADAY for years, says Faulhaber, but the team wanted to be deliberate about their approach.

“We’re not jumping into coats and creating and designing ten coats—we’re just launching one and seeing how it goes,” she says, pointing to the similar way the brand has launched knitwear and dresses. “That’s how we think about expansion, too: really carefully considering what people want and need and where we can have a unique edge and design point of view that makes women’s wardrobes better.”

The question of how to grow a company sustainably was one that the co-founders brought to the table in their conversations with Natalia Oberti Noguera, the founder and CEO of Pipeline Angels, an organization dedicated to “changing the face of angel investing and creating capital for women and nonbinary femme social entrepreneurs.”

The mentorship, which was arranged through a partnership with The Wing and Land Rover, gave He and Faulhaber valuable perspective on how to enhance company culture and get comfortable with delegating as ADAY continues to scale. Similarly, in the time since, they’ve taken on new challenges like rethinking where within the company they can now afford to invest more into, for invaluable returns.

On building a strong foundation for the future

“We are very focused on being a brand that’s still here for the long run,” says He. “We want to be here in 20, 30, 40-plus years really making an impact not only on our customers, but also on the world. And that has really changed a lot of our financial focus, even from the very beginning.”

Related Story
The Founders of ADAY On ‘Doing More With Less'

This mindset meant that, at first, when some of their peers were pouring VC dollars into customer acquisition, ADAY concentrated its efforts on word-of-mouth and press coverage, avoiding paid marketing until the business was on more solid footing.

It has also taken customer feedback into account all along the way, allowing surveys and conversations with the brand’s biggest fans to help steer it in the right direction in terms of launching new products. This way, there’s less risk of the company getting stuck with unwanted inventory because a new style missed the mark.

Thanks to a recent round of funding, the company has been able to put more resources towards hiring new team members—ADAY now has 13 full-time employees, along with 15 part-timers, freelancers, and interns—and expanding its physical presence.

Having more hands around the office has allowed Faulhaber and He to focus on what they need to focus on, including big-picture strategy and management decisions. They’ve also been able to entrust more of their employees as culture carriers who can represent the brand at panel events, in the store, or in interviews with new candidates—something they identified with Oberti Noguera as a focus area during their growth phase.

“We are very focused on being a brand that’s still here for the long run.”

That’s been made easier, they say, by their decision to hire people who are genuine fans of the brand. ADAY’s head of customer experience, for instance, met the co-founders at the brand’s pop-up shop in Nolita in 2017 before joining the team on a part-time, and, later, full-time basis. As part of their onboarding process, they also have new employees sit in on meetings with every part of the team so they understand how they all interact.

“All of these parts of the company really just overlap so much, and what each one of us does really affects all the rest of us,” says He. “So if we don’t see how the parts connect to each other, it’s very hard to do one's job well.”

In their mentorship session, made possible by Range Rover Evoque, Oberti Noguera told the founders, “Culture is living and breathing.” They’ve since taken this advice to heart, focusing equally on hiring employees who are passionate about ADAY and on nurturing their existing team.

With the company now divided between New York City, San Francisco, and London (where it has a second headquarters), one test has been managing culture remotely, which Faulhaber spoke to at a panel event in Los Angeles with Land Rover and The Wing this past fall. She says they’ve achieved this so far by getting everyone from store managers to part-time employees together on the company Slack.

The instant messaging platform “has become our virtual office,” she says, not just for day-to-day workflow, but also for office jokes and casual chit chat. “I think because we all work in different parts of the world and we’ve all been remote from time to time… it’s easy to have that level of empathy,” adds He.

On figuring out when an investment is worth the splurge

One part of scaling that the founders say they’re still getting used to is getting comfortable spending money now that they have more to work with. “A learning that the two of us have been having recently is: ‘Okay, if we actually spend more money on things that, as an [early-stage] startup, we wouldn't necessarily have spent money on, it actually becomes better,” says Faulhaber, pointing at the brand’s San Francisco store as an example.

While the capital expenditure needed to open the location was “scary” compared to what they’d spent on pop-up stores in the past, the response so far has been “incredible,” she says.

In New York, the move to a new, 3,000-square-foot office—which, like the brand’s last one, has a showroom area where customers can shop in person—presented a similar hurdle. “Even this office, when we saw the contract for it, we were like, ‘Whoa, are those real numbers? Did they add another zero on the end for kicks?’” says He.

The extra space, though, means the team isn’t playing musical chairs every morning to find a place to work, and the showroom can accommodate ADAY's growing collections. That’s important not just for the customers who come in to try pieces on, but also for those who set up FaceTime appointments—a service the brand has so far offered to customers in countries such as Singapore, Australia, and Germany.

Next up for 2020? New marketing channels, for one. “We're absolutely at the stage now where talking about a subway ad or something like that wouldn't be an odd conversation to have,” says Faulhaber. When that time comes, it’ll be just one more way ADAY is on the move.

Arianna Huffington's Five Steps to Beat Burnout
Will Women Be the First People on Mars?
Advertisement - Continue Reading Below
Sallie Krawcheck Schools Us in Investing 101
Dara Treseder Is Why You're Obsessed With Peloton
Talking With the Author of This Summer's Must-Read
The Sacred Boom
How to Afford Your Post-Pandemic Getaway
Katrina Lake Is Still a Boss
So You Want a Postnup
Renee Montgomery on Becoming Co-Owner of the Dream