By Julia Felsenthal and Photos by Beau Grealy
Oct 18, 2017

On a recent afternoon in Montreal, actress Sophie Turner was walking down the street when she saw her face on an advertisement for Louis Vuitton’s fall campaign, in which she happens to star. She paused, hoping to sneak a photo. But then a guy walked by, stopped in front of the ad, and stared. It went on long enough that Turner considered filming him on her phone: “I wanted to go up and be like, ‘What do you think? Kind of bad, huh?’”

She’s joking. In conversation, Turner is droll, one way in which she differs from Sansa Stark, her ultraserious Game of Thrones alter ego. The actress is also blunt, outspoken (she made recent news lamenting that a robust social-media following won her a part over a more qualified actor), and someone who came of age in the entertainment industry without fully guzzling the Kool-Aid. Now 21, she landed the role of Sansa at 13, a drama-obsessed kid growing up in the English countryside with two older brothers, a nursery-school-teacher mom, and a dad who works for a pallet distribution company. When she showed up for the casting call, Turner had zero idea what she was getting herself into; she didn’t even know what HBO was. She did know enough to recognize that a gritty role like Sansa doesn’t come around every day: “That’s what I craved. I didn’t want some happy-go-lucky, bubblegum thing. I wanted real acting.”

For the first six seasons of GOT, her character was the biblical Job of Westeros, enduring horror after horror, including a very controversial brutal sexual assault in season five. (On that: “I was happy people were talking about it. But I was angry they put all their effort into [debating] a television sexual assault when it happens around the world every day, and you barely hear of it,” she says.) It’s only in recent episodes that Sansa has come into her own power, and just in time: Next season, the show’s eighth, will be its last.

The end of an era clearly weighs on Turner, who calls the show’s actors and crew “family.” (Maisie Williams, her on-screen sister, is her best friend—they embrace the portmanteau Mophie and share a tattoo commemorating the date they were cast.) “It’s like the carpet is being taken away underneath you,” Turner says. “It’s also exciting because there’s such freedom.”

She’s already begun laying the groundwork for post-Thrones life, with parts in the latest X-Men movies (she plays young Jean Grey); in an indie drama called Huntsville, for which she faked an Alabama accent and covered her body in temporary tattoos; and in Time Freak, a romantic comedy costarring friend Asa Butterfield as her boyfriend that presented some new challenges. “I was like, Oh, God, I’ve never smiled or laughed on camera before,” Turner says.

On the subject of her real boyfriend, (edit note—now fiancé) pop star Joe Jonas, she nervously giggles and won’t reveal a thing. Pure speculation: Perhaps Jonas has something to do with Turner’s recent interest in the guitar. “I’m terrible,” she says. “I really want to learn to play properly.” Also on the horizon: decorating her new home in London and throwing a housewarming for her GOT friends, including Williams, Kit Harington, Rose Leslie, and Alfie Allen, most of whom live “about 10 minutes away from each other.”

So maybe the era isn’t really coming to an end? "It’s still Game of Thrones town in London," she admits, laughing. "We meet up whenever we can. We all party together. We go to festivals together. We’ll probably all be 80 and still going to Glastonbury." 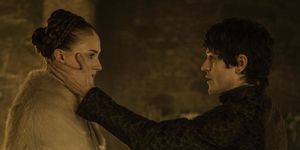 The 'GOT' Showrunner Talks *That* Scene

This article appears in the November issue of Marie Claire, on newsstands now.