Remember when Dan Humphrey turned out to be Gossip Girl on Gossip Girl and you spent the next year of your life in a state of LOL. Well Penn Badgley back at it, only on Lifetime.

In what has to be the most meta moment of his career, Badgley will star in You, a thriller about a bookstore manager who gets close to a woman by "using the internet and social media as his tools to gather the most intimate of details."

"Trust me, the parallels were the first thing that dawned on me when I read the script," he told TVLine. "I have no interest in ignoring the ways in which [Dan and Joe] are similar, or any of the comical parallels between the two. If anything, to the degree that there is any parallel between this role and Dan is the degree to which I get to sort of live out these twisted fantasies that I always wanted to. And that’s that. As much as people want to connect those dots, they’re welcome to, and I’m sure they will. It’s certainly not lost on me. But there’s a lot else about this show that makes it quite different. It’s just a matter of how much people are paying attention.”

Wait, so this is completely amazing. But also important, Badgley talked about his iconic turn as the Upper East Side's resident spy. "I think I got that show the least out of anyone who was a part of it. I have to just admit that," he said. "But I’m happy to wear that crown, so to speak. Like, yeah, okay. I’m Gossip Girl. That’s cool."

Penn Badgley is the hero we don't deserve. 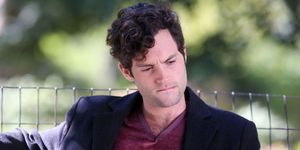 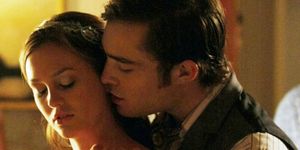 Gossip Girl Cut an Explicit Chuck/Blair Sex Scene
Mehera Bonner Contributor Mehera Bonner is a news writer who focuses on celebrities and royals—follow her on Instagram.
This content is created and maintained by a third party, and imported onto this page to help users provide their email addresses. You may be able to find more information about this and similar content at piano.io
Advertisement - Continue Reading Below
More From Celebrity
The Queen Is Hopeful Prince Harry Will Return Home
Prince Charles Visits the Queen at Windsor Castle
Advertisement - Continue Reading Below
Harry & Meghan React to Prince Philip's Death
Will Harry & Meg Attend Prince Philip's Funeral?
Prince Philip Will Not Have a State Funeral
What 'The Crown' Got Wrong about Prince Philip
Touching Things Queen Has Said About Prince Philip
Your Guide to the Current Royal Line of Succession
Why Wasn't Prince Philip a King?
The World Reacts to the Death of Prince Philip