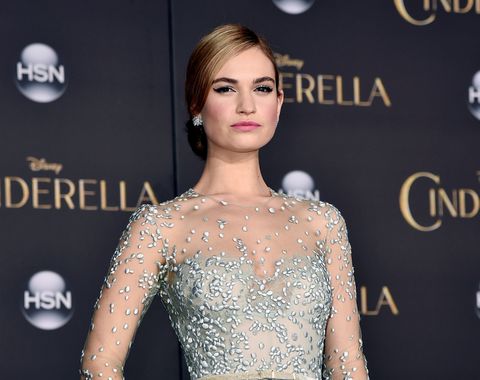 The release of Disney's live action Cinderella has been surrounded by rumors that the fairytale princess's waist is so teeny-tiny that it must have been digitally altered. Disney denied the allegations, but a lot of people on the Internet weren't convinced because, well, it's small.

But now Lily James, the actress playing Cinderella, has spoken out about the CGI dust-up. In an interview with The Los Angeles Times, the star assured everyone that there was no photoshopping involved. "I naturally have a really small waist," she told the Times. "The skirt's big and the corset pulls me in, and that's the point. That's the shape [costume designer] Sandy Powell created."

James also seemed to believe that the airbrushing rumors are a form of skinny-shaming.

"I think it's all very hypocritical, and they contradict themselves, and they're drawing more attention to it," she told the Times. "I think all that stuff's so negative, and you've got to let it wash over your head. I'm so healthy. I've got hips and boobs and a bum and a small waist." You tell them.