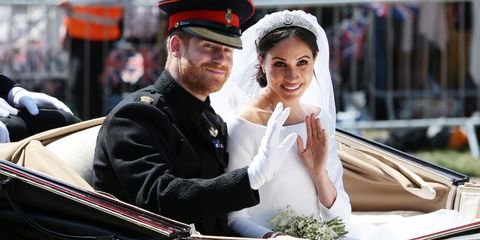 Meghan Markle and Prince Harry are married (it's official and FYI her dress was beyond gorgeous), and they are 100 percent the most chill and relatable royal couple out there. While the pair have been sticking to plenty of traditions (letting Kensington Palace announce their engagement...doing a formal photo shoot), their relationship has also broken royal protocol plenty of times, especially, today, on their wedding day.

She and Harry got married on a Saturday

Royal weddings are traditionally held on weekdays, and then that day is granted a national bank holiday. Kate Middleton and Prince William were married on April 29, 2011, which was a Friday. Since Harry and Meghan chose to get married on a Saturday, May 19, is not a day off of work for British citizens.

In March, Kensington Palace announced that Claire Ptak would be making Meghan and Harry's wedding cake. As for the flavor, the Palace tweeted, "Prince Harry and Ms. Markle have asked Claire to create a lemon elderflower cake that will incorporate the bright flavours of spring. It will be covered with buttercream and decorated with fresh flowers." Yum!

However, it's an age-old tradition that an special royal occasion—whether it's a wedding or a christening—is celebrated with fruitcake, a dessert made with candied or dried fruits, nuts, and spices. Despite being made with lemons, Meghan and Harry's cake doesn't quite make the cut.

The wedding cake is to be served at the Reception. It was designed by Claire Ptak and features elderflower syrup made at The Queen’s residence in Sandringham from the estate’s own elderflower trees, as well as a light sponge cake uniquely formulated for the couple. #royalwedding pic.twitter.com/kt5lE4tEn9

She Chatted About Her Love for Harry in a Major Magazine

In a move that is *completely* unprecedented for royals, Meghan covered Vanity Fair and spoke at length about her relationship with Harry—before they were engaged. "I can tell you that at the end of the day I think it's really simple," she said. "We're two people who are really happy and in love. We were very quietly dating for about six months before it became news. And I was working during that whole time, and the only thing that changed was people's perception. Nothing about me changed. I'm still the same person that I am, and I've never defined myself by my relationship."

It's not *completely* foreign territory for a royal to agree to a magazine cover (Kate Middleton was in British Vogue), but to open up about her private life with Harry pre-engagement and in such an official manner was gasp-inducing.

As we know from William and Kate, holding hands in public is not allowed when you're a royal:

But Prince Harry and Meghan Markle broke this unspoken rule during their joint appearance at Toronto's Invictus Games, where they were spotted holding hands/being each other's lobsters. FYI, the reason royals aren't allowed to hold hands is because they are (per royal etiquette Myka Meier), "working representatives of British Monarchy."

She's Been Married Before

Before dating Harry, Meghan was in a relationship with producer Trevor Engelson. They got divorced in August 2013, and now he's making a show about a man who has to share custody of his child after his ex marries a British royal. SIDE EYES. Per Deadline, this is the cringe-inducing plot: "Divorce is hard. Sharing custody is harder. Sharing custody with the British Royal family when your wife marries a prince, in the unforgiving spotlight of London’s tabloid media, is next level."

FYI, marrying someone who's been divorced is no longer a problem for the British monarchy, but it's definitely unusual—lest you forget, Princess Margaret had to break off her relationship with Peter Townsend because he was divorced, and Edward VIII had to straight up abdicate in order to marry Wallis Simpson.

She Didn't Belong to the Church of England

Obviously, British royals are tolerant of all religions, but being a member of The Church of England is definitely the norm—and per People, "in order to remain in the line of succession, members of the royal family cannot be Catholic." This won't effect Meghan thanks to laws changing in 2013, which allow people in the line of succession to marry whoever they want regardless of religious affiliation. Meghan reportedly went to Catholic school, but in March she was baptized into the Church of England, perhaps as a sign of respect for the Queen.

While diamonds certainly aren't unusual when it comes to engagement rings, the royals tend to favor gem stones. Princess Diana's ring (and now Kate Middleton's) features a sapphire, as does the engagement ring of The Queen Mother, and that of Princess Anne. Meanwhile Sarah Ferguson was given a ruby ring, as was Princess Margaret.

Related Story
10 Things We Learned from the Royal Jeweler

She's an Actress and Very Much in the Public Eye

In case you hadn't noticed, Meghan isn't a royal. She's an actress in the public eye, most famous for Suits. She also isn't a member of a posh British family like Kate Middleton is. Basically, she's a completely normal woman, and in this way—more than anything else—she's breaking the royal mold. 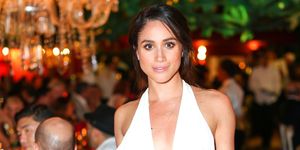 What Prince Harry & Meghan's Wedding Might Be Like
Your First Look at Meghan Markle's Engagement Ring
Mehera Bonner Contributor Mehera Bonner is a news writer who focuses on celebrities and royals.
Alex Warner
This content is created and maintained by a third party, and imported onto this page to help users provide their email addresses. You may be able to find more information about this and similar content at piano.io
Advertisement - Continue Reading Below
More From Celebrity
The Queen Shares an Emotional Birthday Message
Chloe From 'Too Hot to Handle' Is in 'The Circle'
Advertisement - Continue Reading Below
Comparing the Two Biggest Royal Weddings
Kate, George, and Charlotte Were Seen Shopping
J.Lo Shares First IG Photo Post A-Rod Split
Harry Has Experienced "Frostiness" from Royals
Billie Eilish Just Debuted a Bouncy Blonde Blowout
Gigi Shared an Adorable Spring Selfie With Khai
Katie Holmes Posted a 15th Bday Tribute to Suri
Chrissy Teigen Talked Stigma Around Infertility