Caitriona Balfe is best known for her role as Claire Fraser on Outlander, and while attending the 75th annual Golden Globes Sunday night (she was nominated for "Best Performance by an Actress in a Television Series–Drama") the 38-year-old completely shocked everyone on the red carpet when a gorgeous engagement ring was spotted on her finger. See for yourself below.

So who's the lucky guy? Balfe told People she's engaged to her boyfriend of almost two years, Tony McGill. The couple have kept their relationship very private. As in, so private that there's virtually zero evidence of McGill on the internet. Here's the little of what we know about Balfe's fiancé and their relationship over the past two years.

They got engaged over the holidays.

"It happened over the break," Balfe revealed. "I’m very happy."

Did "McGill" give it away?

There's a throwback video of the pair from 2015, and he looks *so* in love with her.

They've only been spotted in public together twice.

First at the 2016 ceremony for Jodie Foster’s star on the Hollywood Walk of Fame and almost a year ago at the 2017 Oscar Wilde Awards.

And although McGill seems like more of a mystery man than ever at this point, we can only hope the pair will be more open about their relationship now that Balfe has *officially* announced the engagement. 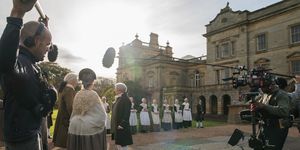 Behind-the-Scenes of 'Outlander'
Rachel Epstein Editor Rachel Epstein is an editor at Marie Claire, where she writes and edits culture, politics, and lifestyle stories ranging from op-eds to profiles to ambitious packages.
This content is created and maintained by a third party, and imported onto this page to help users provide their email addresses. You may be able to find more information about this and similar content at piano.io
Advertisement - Continue Reading Below
More From Celebrity
Emma Watson Stunned at the Earthshot Prize
Kate "Didn't Have Much Energy to Bond" With Meghan
Advertisement - Continue Reading Below
Blake Lively Trolled Ryan Reynolds Again
Kourtney Kardashian and Travis Barker Are Engaged!
See Kate Middleton's Subtle Environmental Look
Prince George "Adored" Seeing Dinosaur Fossils
Kate Middleton Borrows The Queen's Fashion Trick
Princes Charle and William "Competing" Over Causes
Lilibet May Be Christened in California After All
The Sweet Family Photos in Prince William's Office