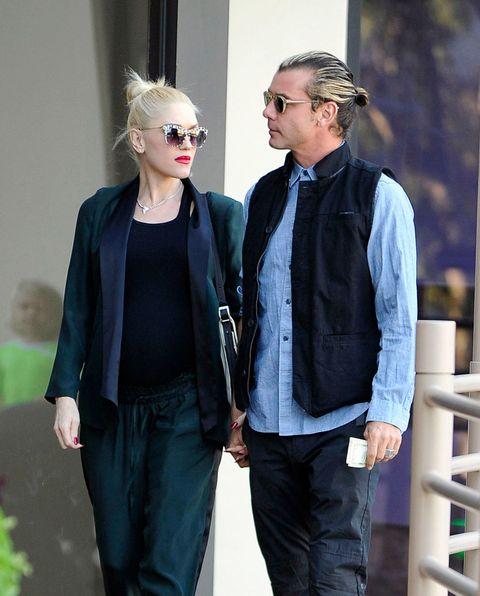 There are at least two reasons celebrity divorces are so upsetting, and not just in the why-won't-it-stop agony of the bizarre onslaught we've experienced this summer. You know by now the (growing) list of recent famous-couple splits—and to some extent, have probably felt a little of their pain.

For one, celebrity divorce news disrupts the fantasy of the A-list life. If these two beautiful people, with all their money and private jets and housekeepers and chefs, can't make it work, what hope can we have, the peasants who have to fight about doing the laundry or paying for takeout? And then there's obvious the fact that divorce is simply a bummer. You see a happy couple in love—and then it ends. You may not know them personally, as friends. But you know of them, and every breakup, everywhere, can feel like an argument against love (hence the sudden spate of "Love Is Dead" headlines and social-media cries).

But here's the thing: Unlike your divorced friends, celebrities have to draft an actual statement declaring their marital failure to the whole world, which will result in the immediate freaking-out of the internet (see above in re: to "Love Is Dead.")

In real life, it's horrific telling your parents, your friends, your kids—but for the upper crust, they have to tell the entire planet. And sure, they have help from publicists in choosing their words (and dealing with the fallout), but some perspective into their situations and thought processes still sneaks through.

Their phrasing can be fascinating, whether they're veiling little jabs or creating a new kind of anti-love poetry. The professional requirement to put this pain into public words—for the sake of their careers, for the sake of fans—occasionally reveals surprisingly profound insights about relationships.

When announcing their divorce, after 13 years of marriage, earlier this week, Gwen Stefani and Gavin Rossdale issued what can seem like a standard statement: "While the two of us have come to the mutual decision that we will no longer be partners in marriage, we remain partners in parenthood and are committed to jointly raising our three sons in a happy and healthy environment," they told Us Weekly. It's a smart sleight of hand: Highlighting the health of their children means (hopefully) the media won't tear into them with salacious rumors about the reasons behind their breakup, and will let them do their falling out in peace. The statement is also noticeably emotionless—"come to the mutual decision," "partners in marriage"...there's a business-like seriousness to the split.

Jennifer Garner and Ben Affleck pull a bit more at the romantic heartstrings: "After much thought and careful consideration, we have made the difficult decision to divorce." It's difficult for them, and therefore more emotional for us. Many breakup statements could fall into this category, the one that implies they tried and they tried to make it work, and finally decided it couldn't. (Affleck's ex Jennifer Lopez and Marc Anthony, for example, ended their marriage by saying, "This was a very difficult decision. We have come to an amicable conclusion on all matters.") But the civility does feel strained—it belies the years and years of rumors about Affleck's cheating. Here's where you kind of wish Garner could just come out swinging: "I can't believe I spent so long with this schmuck. PEACE OUT, BUDDY." But there is, of course, the Big Consideration: their careers, which are dependent on box-office viability, which is in turn dependent on likability. So no smearing here.

In their announcement, Miranda Lambert and Blake Shelton began, "This is not the future we envisioned." It's a bold way to kick off—serious, somber. It acknowledges what many statements don't: the feeling of failure that can come with divorce. They continue: "It is with heavy hearts that we move forward separately. We are real people, with real lives, with real families, friends and colleagues." Another proactively defensive maneuver (hey, we're actual humans so please don't hurt us?), but one that's interestingly aligned with their careers—as country music stars, being "real" is key. And potential future breakup songs are hugely marketable.

"We are releasing each other with love so that we may take on our new form."

Singer Jewel wrote a particularly striking blog post when she separated from husband Ty Murray last year. "We did not want anger to burn the ties that bound us. Instead we have chosen the much more difficult task of undoing ourselves stich by stich [sic], and releasing each other with love so that we may take on our new form: dear friends and devoted co-parents of our beloved son Kase." The words are expectedly poetic, coming from the songstress, but also sweet. Their split seems more like an act of love than anything else, and because of that, there's no perception of drama—she, her ex, and their fans can all move on quickly.

And of course, perhaps the most famous divorce statement in history: Gwyneth Paltrow and Chris Martin's. The phrase "conscious uncoupling" may follow them to the grave, but people couldn't stop talking about the idea, in part, because it was interesting. It suggests an awareness and dedication to detaching from each other. A good divorce, if such a thing is possible. Something that, thanks to the wording of their statement, wasn't a "divorce" at all.

Kaitlin Menza Kaitlin Menza is a freelance features writer.
Advertisement - Continue Reading Below
More From Celebrity
58 Celebrities Who Hated Their Roles
Prince Harry Grins as He Returns to Canada
Advertisement - Continue Reading Below
Meghan Markle Went on a Hike With Archie
Serena Williams Fully Shut Down a Meghan Question
Camilla's Asked Whether She'll Miss the Sussexes
Harry's Speech Sounds Just Like Diana's in 1993
The Queen Is "Very Sad" About Archie Moving
Kim Kardashian Wants to Open Her Own Law Firm
Harry & William Ended Their Feud With Secret Talks
Zoë Kravitz's Vintage Glamor at the SAG Awards