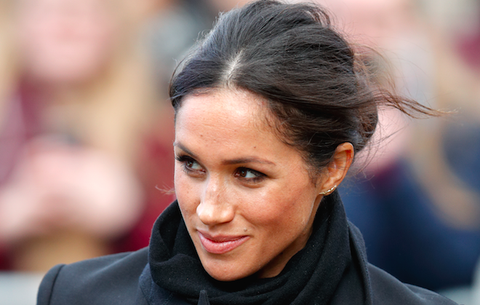 Being a member of the royal family comes with a certain amount of rules, and clearly there's a learning curve because Meghan Markle just broke one. During her visit to Wales with Prince Harry, the Suits actress reportedly signed a little girl named Caitlin Clark's autograph book, writing "Hi Kaitlin" with an accompanying heart and smiley face.

"I don’t really care [about the misspelling]," Clark said. "My heart is still racing. I’ve never got a royal autograph before. This is going to make everyone jealous."

The Express had previously reported that the royal family aren't allowed to sign their names, as "the long-standing rule remains in place for all royals because of the risk of the signature being forged."

Prince Charles once broke the rule by writing "Charles 2010" for a fan in 2010, but for the most part the family is told to decline all requests for signatures.

Related Story
Strict Rules the Royal Family Has to Follow
Mehera Bonner Contributor Mehera Bonner is a news writer who focuses on celebrities and royals—follow her on Instagram.
This content is created and maintained by a third party, and imported onto this page to help users provide their email addresses. You may be able to find more information about this and similar content at piano.io
Advertisement - Continue Reading Below
More From The Ultimate Guide to the Royal Family
Will Asked His Uncle to Talk to Harry About Meghan
Why the Queen Denied Meghan's Wedding Tiara Pick
Advertisement - Continue Reading Below
Will & Harry's Reactions to Their Parents' Divorce
Harry & Meghan's Drama Won't Be on 'The Crown'
Will's Talk with Charles That Led Him to Kate
The Queen Saved Will from a Breakdown as a Teen
Prince Philip Has "Walked Away" From Prince Harry
Jessica Mulroney Slams Fake Friends on Instagram
Princess Charlene of Monaco's Top Looks
Diana's Note About Her BBC Interview Is Missing