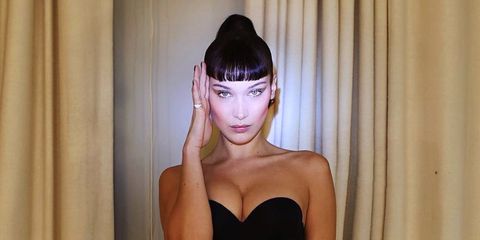 Bella Hadid isn't afraid of showing some skin, and her latest Instagram snap proves it. In the pared back shot, Hadid wears a strapless black bra, with matching panties, and literally nothing else. With her hair scraped back tightly into a bun, Hadid looks nothing short of seductive, and the photo comes with a mysterious message.

Along with the photo, Hadid posted the caption, "You Should Let Me Be Right For A Minute🔓":

You Should Let Me Be Right For A Minute🔓

Whether or not this message is aimed at someone in particular remains unclear. But it's worth noting that Hadid's caption is a line from "Start a Riot" by Kodie Shane.

Regardless of whether Hadid's caption means anything, it's clear that the model isn't messing around. And as usual, she looks completely flawless.