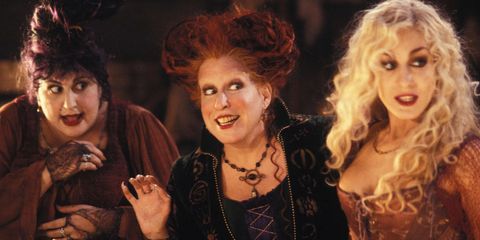 He was offered the role of Max, but he turned it down to star in What's Eating Gilbert Grape? Which was probably a good career move (sorry, Omri Katz), but can you IMAGINE Leo in Hocus Pocus?! Magic.

He turned it down because he wanted a happier ending. (Lolz.)

3. The murderer's robe in 'Scream' was originally going to be white.

Filmmakers changed it at the last minute because they thought it looked too much like a KKK robe.

4. The mask in 'Halloween' is actually a mask of William Shatner.

It was a stretched out Captain Kirk mask.

5. To film that premonition scene in 'Final Destination 3', the actors had to ride the roller coaster *26* times.

6. The original title for 'The Texas Chainsaw Massacre' was 'Head Cheese.'

7. 'The Candyman' (AKA Tony Todd) had to put real bees into his mouth for the movie's pivotal moment.

8. Freddy Krueger was originally going to be a child molester.

They decided, smartly, that that might be *too* dark.

9. The skeletons in 'Poltergeist' are real human skeletons.

10. To make that creepy walk in 'The Ring', they filmed Samara walking backwards and then reversed the shot.

Bonus: 'E.T.' was originally conceived as a horror movie.