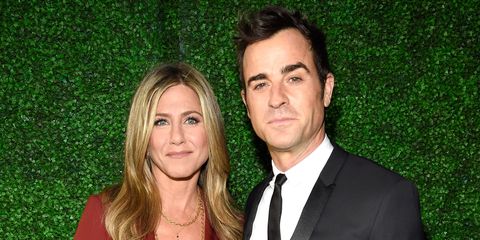 The news that Jennifer Aniston and Justin Theroux have separated after two years of marriage has devastated fans of the couple worldwide. But now, according to reports, the pair might not have been legally married to begin with.

TMZ has done some digging, and they're reporting that there is no record of a marriage license for the couple in L.A. County, and that they checked "all the way back to 2010."

Aniston and Theroux got married at their house in Bel-Air in August 2015, in a surprise backyard wedding, so TMZ has done some major due diligence by checking as far back as 2010 for a marriage license.

To make matters even more interesting, TMZ cites some sources as claiming that rumors about the couple's "unofficial" marriage have been bouncing around for years. As TMZ reports:

They could have gotten a marriage license in any of the 57 other counties in California, but we spoke with some Jen sources who have had regular contact with her for years, and they say there's been talk for a long time they might not be legally married.

However, the publication also concedes that "There's such a thing as a confidential marriage license, but we're told they did NOT get one in L.A. County." So it's possible that Aniston and Theroux either have a super secret confidential license, or that they applied in another county.

For now, we'll just have to wait to find out if Aniston and Theroux enter official divorce proceedings. The couple apparently has an "iron clad" prenup.

Amy Mackelden Weekend Editor Amy Mackelden is the Weekend Editor at HarpersBAZAAR.com, where she writes about entertainment, celebrity news, beauty, and fashion.
This content is created and maintained by a third party, and imported onto this page to help users provide their email addresses. You may be able to find more information about this and similar content at piano.io
Advertisement - Continue Reading Below
More From Celebrity
Kate Middleton Wears an Oversized Barbour Jacket
J.Lo's New Song "In the Morning" Is Sexy AF
Advertisement - Continue Reading Below
The Queen Has Launched Her Own Gin
How Celebs Are Celebrating Thanksgiving This Year
Harry and Meghan Can't Comment on 'The Crown'
Charles & Will Supported Harry After Miscarriage
All the Black Friday Sales Royal Fans Need to Shop
Meghan's Mom Is Helping Her Heal After Miscarriage
Celebs Reveal Their Worst On-Screen Kisses
Duchess Kate Looks Stunning in a Pink Suit