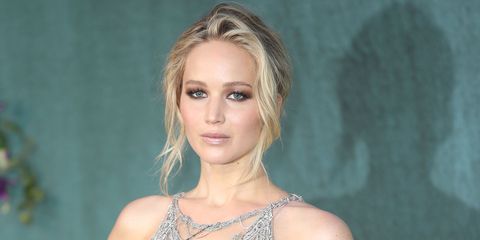 Jennifer Lawrence is making a big change—over the next year, the multi award-winning actress won't be working on any new movies. Instead, Lawrence plans to focus on activism, and encouraging young people to become more engaged with politics.

In a new interview with Entertainment Tonight, while promoting her latest movie Red Sparrow, Lawrence said, "I'm going to take the next year off. I'm going to be working with this organization as a part of Represent.Us... trying to get young people engaged politically on a local level."

As for the focus of her work, Lawrence elaborated, "It's just anti-corruption, and stuff trying to pass state by state laws that can help prevent corruption, fix our democracy."

In January, Lawrence paid a visit to Ohio's Cleveland Heights High School to discuss corruption in politics, on behalf of Represent.Us. Of Lawrence's visit, one student told E! News, "It makes a big difference when people who are just 10 years older than us come to talk about political issues. When she said, 'This is your time,' that really made me think."

As well as meeting with students, Lawrence was active in the Women's March last month, and posted on Facebook her support for women’s rights, equal pay, DACA, and CHIP:

Lawrence's announcement comes after she attended Amy Schumer's surprise wedding this week. Of her friend's nuptials, Lawrence told Entertainment Tonight, "Like, his vows were stunning. It's just when two people really love each other and they really mean it, it shows, and it was a beautiful ceremony and an amazing time. It was great. I couldn't be happier for them."

Marie Claire
Amy Mackelden Amy Mackelden is a freelance writer, editor, and disability activist.
This content is created and maintained by a third party, and imported onto this page to help users provide their email addresses. You may be able to find more information about this and similar content at piano.io
Advertisement - Continue Reading Below
More From Celebrity
The Queen Displayed a Rare Photo of the Sussexes
Justin Backs Britney After Conservatorship Hearing
Advertisement - Continue Reading Below
Jen Aniston Said a Male 'Friends' Star Was Rude
Jennifer Aniston on "Silly" Love Life Speculation
People Are Devastated by Britney's Revelations
Britney Spears on "Abusive" Conservatorship
'Too Hot to Handle' S2 Was Filmed In Paradise
About That "Sexy Nerd" From 'Too Hot to Handle'
Prince Charles Is Leaving London When Harry Visits
What Happens on Katie's Season?