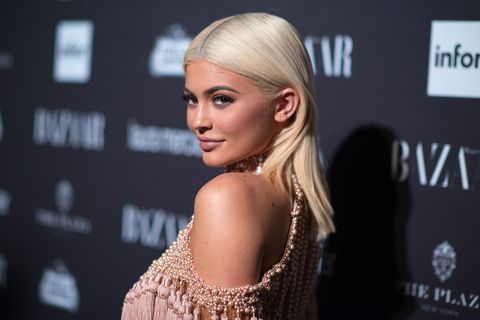 In case you were in need of any further evidence that the Kardashian-Jenners are omnipotent and very possibly the architects of society as we know it, please observe this series of events from the past 24 hours. On Wednesday, February 21, Kylie posted a tweet asking: "sooo does anyone else not open Snapchat anymore? Or is it just me... ugh this is so sad."

sooo does anyone else not open Snapchat anymore? Or is it just me... ugh this is so sad.

It is sad, Kylie, that's true, but it didn't get really sad until the following day, when Snapchat's stock plummeted. Here's a screen grab of Snap's stock performance on Thursday, February 22.

It's rough. Now, correlation does not necessarily equal causation, so Kylie's tweet and the Snapchat stock downturn could be unrelated. But she is one of Snapchat's most popular and influential users, and has 24.5 million Twitter followers, so there's no doubt that a ton of people saw her tweet. And as The Verge notes, the timing of it all suggests that there's a direct connection: as of 1:30PM ET on Wednesday, Snapchat stock sat at $19.02, which represented an upturn from the previous day. At 4:50PM ET, Kylie sent the tweet, and the stock immediately began to fall. It had dropped by close to 8 percent at the time of writing, which per Reuters constitutes roughly a $1.5 billion loss in market value.

A few minutes after her original tweet, Kylie did follow up with some damage limitation, but maybe too late.

still love you tho snap ... my first love

Emma Dibdin Emma Dibdin is a freelance writer based in Los Angeles who writes about culture, mental health, and true crime.
This content is created and maintained by a third party, and imported onto this page to help users provide their email addresses. You may be able to find more information about this and similar content at piano.io
Advertisement - Continue Reading Below
More From Celebrity
Matt Damon Trolled Ben Affleck and Jennifer Lopez
This Old Video of the Queen Saying "Nah" Is LOL
Advertisement - Continue Reading Below
Diana Had a Secret Message on Her Wedding Shoes
Will's Friends Made "Jibes" About Kate's Mom
William Will Suffer "Worst" from Harry's Memoir
Simone's Boyfriend Sent Her the Sweetest Message
Harry's Friends Don't Want to Be in His Memoir
Will & Kate's Modern Approach to Raising George
Meet Simone Biles's Super Supportive Parents
What Happens on Katie's Season?