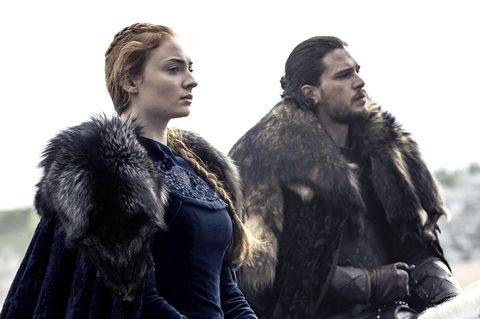 The first three things that come to mind when someone says Game of Thrones: dragons, Jon Snow, and hair. (Okay, maybe that’s just me, because I’m a beauty editor and also because JON FREAKING SNOW.)

But, apparently everything we know is a lie, because according to actress Sophie Turner, all that famous, screenshot-worthy hair is fake. Totally, and completely fake. *Cue dragon screech*

And though we’ve all known forever that some characters, like Daenerys Targaryen and Cersei Lannister, were most definitely wearing wigs throughout the seasons, it may come as a shock to hear that Turner—i.e. Sansa Stark—is now wigging it, too. “I could not count the amount of wigs we use on that show if I wanted to—almost everyone wears one,” said Turner in an interview with Refinery29.

Of course, with every new season comes a crazier and crazier braid scheme for Sansa, so a full-time wig for Turner (who has been wearing her natural hair platinum blonde for the last few months), isn’t surprising. But here’s what is: Most of the men are opting for wigs, too, and not just not on their heads.

"A lot of the guys will have hair inserts glued on that they probably don't want people to know about, but it's true. Or they'll do beard wigs, or use little pieces of hair to fill in the gaps in their beards,” she said.

Though Turner wouldn’t name names, I invite you to mentally run through the roster of all one-zillion men on that show and take a closer look at their beard hair the next time Game of Thrones is on, which feels like a full century from now.

Chloe Metzger Deputy Beauty Director Chloe Metzger is the deputy beauty director at Cosmopolitan, obsessively writing about new makeup launches, the best hair products (curly girl here; whattup), and the skincare formulas that really work for every skin type (follow her on Instagram to see behind-the-scenes pics of that magazine life).
This content is created and maintained by a third party, and imported onto this page to help users provide their email addresses. You may be able to find more information about this and similar content at piano.io
Advertisement - Continue Reading Below
More From Trending Beauty
I Tested Meghan Markle's Top Beauty Products
Glitter Pumpkin Butts Are a Thing for Halloween
Advertisement - Continue Reading Below
Behold: The Self-Tanner Fail to End All Fails
This Is Pinterest's #1 Halloween Makeup Idea
These 3 Products Cured This Woman's Acne
Princess Eugenie Just Dyed Her Hair Bright Red
13,000 People Swear By This Eye Cream
Post Malone Cut His Hair and Looks Unrecognizable
Shay Mitchell Will Only Use This One Concealer
People Are Freaking Out About Emma Stone's Hair