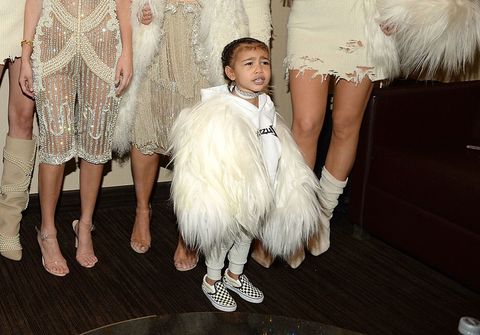 Among the luminaries at Kanye West's Yeezy show this week was... MC Hammer! This is mostly exciting because, Us Weekly reports, he filmed the Kardashian/Jenner squad fanning out over the whole show/album listening experience. In the video he posted to Twitter from his prime seat behind all of Kanye's in-laws, we see Kendall and the rest of the family dancing along, including North West, who was so excited she was also dancing in her seat next to mother Kim:

In the video it looks like Kendall and Caitlyn Jenner are fanning out, appropriately, over North being so freaking adorable. Which, in those Balmain x Yeezy fuzzy couture baby sleeves and everything, why would they want to watch anything else? Like the fashion show they were all there to celebrate? Granted that was basically beside the point at this event. Dancing babies FTW!

Amy Odell editor Amy Odell is the editor of Cosmopolitan.com.
This content is created and maintained by a third party, and imported onto this page to help users provide their email addresses. You may be able to find more information about this and similar content at piano.io
Advertisement - Continue Reading Below
More From Celebrity
People Are Devastated by Britney's Revelations
Britney Spears on "Abusive" Conservatorship
Advertisement - Continue Reading Below
'Too Hot to Handle' S2 Was Filmed In Paradise
About That "Sexy Nerd" From 'Too Hot to Handle'
Prince Charles Is Leaving London When Harry Visits
What Happens on Katie's Season?
Meghan Wrote a Book When She was in Eighth Grade
Irina Pairs Her LBD With a White Shirt and Sandals
A-Rod Explained Why He Was Spotted With Ben's Ex
Selena Felt "So Less Than" in Past Relationships