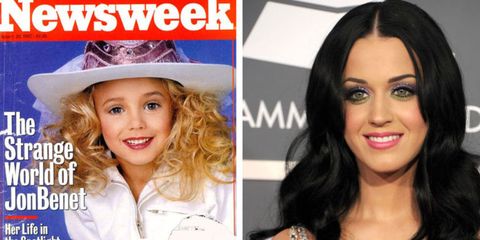 First, it was who killed Kennedy. Then people questioned whether or not we actually landed on the moon.

And now a new conspiracy theory is taking over: Is superstar Katy Perry actually JonBenét Ramsey, the then-6-year-old Colorado beauty pageant contestant who was killed in 1996 and found in her basement eight hours after being reported missing?

Yeah, let that sink in for a second.

A video, which was posted by Dave Johnson on YouTube, has garnered over 99,000 views since it was posted in December 2014.

Yes, this conspiracy theory video has been up for awhile now, and it's anyone's guess as to why it suddenly exploded on social media seemingly overnight.

Check out the video below, if you want to get the full dose of what-the-heck-is-going-on-here:

If you prefer to save your brain cells for, say, literally anything else, here's the CliffsNotes version of the video:

1. When the photos of JonBenét Ramsey and Katy Perry overlap, they look eerily similar.

2. When the photos of Ramsey's parents and Perry's parents overlap, they look eerily similar.

3. Oh, and if you told anyone JonBenét Ramsey died, then you need to go back and tell them she didn't die, or else you're a liar who lies.