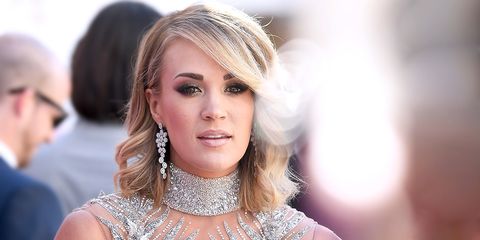 Carrie Underwood just released a new music video, the first since her scary injury back in November when she fell down a flight of stairs and had to get 40 stitches in her face. Ow.

The singer has returned to the spotlight with a music video for "The Champion," which you probably heard during the Super Bowl and the winter Olympics, and it's—in a word—inspiring. The video features a montage of all different kinds of "champions," including activists, teachers, Olympians, and more. Notably, it shows women supporting the #MeToo movement.

Underwood is mostly hidden behind a microphone throughout the video, though we do get a quick look at her working out. Since her accident, we've seen at least one picture of her. If this video isn't a sign that she's coming back stronger than ever, then we don't know what is.

Alex Warner
Advertisement - Continue Reading Below
More From Celebrity
Prince Harry and Meghan Markle's 53 Cutest Moments
RiRi Was Shocked by the Reaction to Fenty Beauty
Advertisement - Continue Reading Below
Behold: Celebrities Who Dated Normals
Kate Middleton & Michelle Obama Use This $64 Cream
A Full Timeline of Tyler C. & Hannah B.
Blake and Ryan Donate $400K to NY Hospitals
Prince William May Work as an Air Ambulance Pilot
Harry Is Likely to Get U.S. Diplomatic Status
Harry Was Forced to Give Up His Military Titles
Ariana Grande Revealed Her Natural Curls