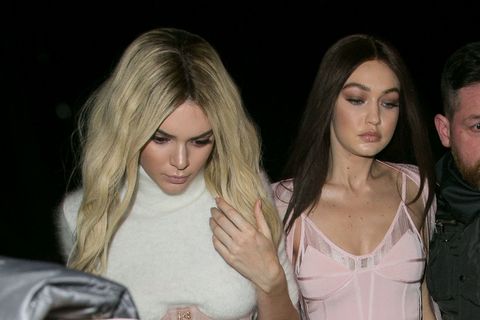 Kendall Jenner and Gigi Hadid attended the Balmain after-party following the label's fashion show in Paris on Thursday. They got wear looks from the show right off the runway to the event, because they're special like that. And seriously, Kendall's sculptural corset bustier dress is epic.

Upon leaving the party, People reports that Kendall got in "a scuffle" with a photographer. She pushed and punched him, JustJared adds, because he'd gotten too close to her and Gigi. People's photos show Kendall and Gigi pointing and shouting at the offending paparazzo and being restrained by their bodyguard (who, People notes, also held the pap back).

Kendall's often had a rough time with the crowds of fans and photographers that seem particularly cray in Paris — remember that time she was almost trampled?!

Alex Rees Deputy Editor of News I’m the news director here at Cosmopolitan.com, and I could really use a cup of tea right now.
This content is created and maintained by a third party, and imported onto this page to help users provide their email addresses. You may be able to find more information about this and similar content at piano.io
Advertisement - Continue Reading Below
More From Celebrity
Meghan Markle Looked Gorgeous at Global Citizen
Harry and Meghan Are Taping Their NYC Trip
Advertisement - Continue Reading Below
Keep an Eye on Lady Louise Windsor
Princess Beatrice's Daughter May Get a Royal Title
James Middleton’s Wife Thought He Was a Waiter
Meghan Markle Got a New Nickname
Harry Said the Queen and Philip Were "Adorable"
Kate Middleton Played Tennis With Emma Raducanu
Tom Felton Collapsed on a Golf Course
Ashley Olsen Made a Rare Red Carpet Appearance