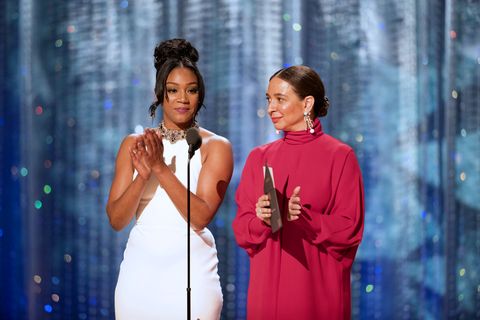 So often, the whole "Celebrities, they're just like us" spiel rings hollow. But in the case of Tiffany Haddish, a.k.a. the breakout female star of 2018, there's some truth in it. If you or I had spent money on a bona fide designer dress—say, a $4000 Alexander McQueen—we'd want to get as much use as possible out of it. It just makes sense. Tiffany Haddish wore said Alexander McQueen dress at the Oscars this evening, because she is a smart woman who appreciates the value of things.

You remember this dress. It's the one Haddish wore back in November when she hosted SNL. "This a Alexander McQueen, okay? This a $4,000 dress. Imma wear this dress multiple times," she said during that appearance. "I feel like I should be able to wear what I want, when I want, as many times as I want as long as I Febrezed it." Us too.

Haddish had previously worn the dress on the Girls Trip red carpet. "My whole team, they told me, ‘Tiffany, you cannot wear that dress on SNL. You already wore it. It’s taboo to wear it twice,'" Haddish told Us Weekly. "I said, ‘I don’t give a dang about no taboo.’”

And tonight, at the 2018 Oscars, that beautiful white dress got its third major outing, as Haddish presented the Oscar for Best Documentary Short and Best Live Action Short alongside Maya Rudolph. This time, she paired it with Ugg slippers, so never let it be said that she's not switching up her look.

Emma Dibdin Emma Dibdin is a freelance writer based in Los Angeles who writes about culture, mental health, and true crime.
This content is created and maintained by a third party, and imported onto this page to help users provide their email addresses. You may be able to find more information about this and similar content at piano.io
Advertisement - Continue Reading Below
More From The Oscars 2021
Twitter Is Not Happy With How the Oscars Ended
Glenn Close Dances to "Da Butt" at the Oscars
Advertisement - Continue Reading Below
‘Ma Rainey’s Black Bottom’ Oscar Makes History
The Oscars Were All About the '90s Midriff
Alan S. Kim Channeled David Rose at the Oscars
How Daniel Kaluuya's Mom Reacted to His Speech
Carey Mulligan Is a Gold Goddess at the Oscars
Riz Ahmed Put Every Husband to Shame at the Oscars
The Best Red Carpet Looks at the 2021 Oscars
How to Watch or Stream the Oscars