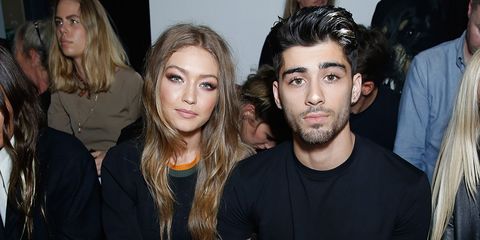 News broke today that Zayn Malik and Gigi Hadid have split. The couple, who first started dating in November 2015, reportedly ended things amicably, after growing apart for a while. The news came as a shock—but maybe it shouldn't have. Here are four signs that the split was coming.

They haven't been photographed together in months.

The couple, who were once spotted together in public regularly, haven't been photographed out since January, when they wore these matching Matrix-inspired ensembles in New York City.

They stopped 'gramming together.

The last Instagram Gigi posted of Zayn was from January, celebrating her then-beau's birthday. As for Zayn, his most recent lovey post went live in November 2017.

Gigi opened up about the difficulties of maintaining a high-profile relationship in February.

During an interview with Vogue, Gigi talked about the struggles that come with a high-profile relationship.

"If I post what I think would be normal to post with your boyfriend then the comments are: ‘It’s extra,’ ‘It’s forced,’ ‘It’s fake,’" she said. "And then if I don’t do enough then they’re like, ‘They’re not really together,’ so it’s kind of always a battle. But I do what feels true to me and I try to do it with integrity and all I can hope is that people would see it’s real."

Zayn has been posting some moody new videos.

They're beautiful, but just they just sound like heartbreak.

Kayleigh Roberts Contributor Kayleigh Roberts is the weekend editor at Marie Claire, covering celebrity and entertainment news, from actual royals like Kate Middleton and Meghan Markle to Hollywood royalty, like Katie Holmes and Chrissy Teigen.
This content is created and maintained by a third party, and imported onto this page to help users provide their email addresses. You may be able to find more information about this and similar content at piano.io
Advertisement - Continue Reading Below
More From Celebrity
Who Is Alev Aydin, Father of Halsey's Child?
Surprise—Halsey Is Pregnant With Her First Child
Advertisement - Continue Reading Below
Um, Why Is the Weeknd's Face Bloody and Bandaged?
Your First Look at Kristen Stewart as Diana
47 'Friends' Facts Every Superfan Should Know
Eugenie Shared a Rare Candid Snap With Her Husband
Why Serena Didn't Want Olympia to Play Tennis
J.Lo Talked Botox Claims: "Don't Call Me a Liar"
Kate Has Her Own Direct Line to the Queen
Megan Thee Stallion’s Hottie Bootcamp Is Intense