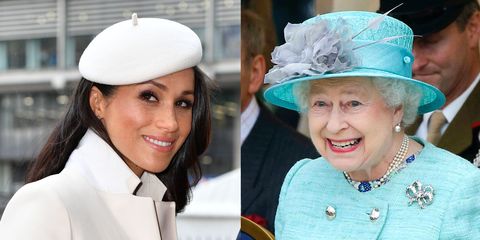 Another day, another royal wedding drama. The world is now convinced that Queen Elizabeth II shaded Meghan Markle when she gave her consent for Prince Harry to marry the Suits actress.

According to the internet, the Queen referred to Kate Middleton in a very different manner when she gave her permission for Prince William to get married. But as Harper's BAZAAR points out, the comparisons are unfair for an important reason.

In yesterday's announcement, the Queen wrote, "I declare My Consent to a Contract of Matrimony between My Most Dearly Beloved Grandson Prince Henry Charles Albert David of Wales and Rachel Meghan Markle, which Consent I am causing to be signified under the Great Seal and to be entered in the Books of the Privy Council."

The Queen has officially given her consent for the marriage of her "most dearly beloved grandson" Prince Harry to Meghan Markle pic.twitter.com/jZ7gSaA5th

But as Hello! magazine notes:

"The Instrument of Consent... comes closer to the actual wedding day, while the Privy Council declaration for Prince William and Catherine was almost word-for-word the same as Prince Harry and Meghan, reading: 'I declare My Consent to a Contract of Matrimony between My Most Dearly Beloved Grandson Prince William Arthur Philip Louis of Wales and Catherine Elizabeth Middleton.'"

So there you have it. The Queen didn't intentionally shade Markle. Plus, it's very possible that when Prince Harry's Instrument of Consent is released closer to his wedding day, the Queen will have written some sweet words about Markle, too. Probably.

Related Story
Inside the Wild Life of a Royal Correspondent
Marie Claire
Amy Mackelden Amy Mackelden is a freelance writer, editor, and disability activist.
This content is created and maintained by a third party, and imported onto this page to help users provide their email addresses. You may be able to find more information about this and similar content at piano.io
Advertisement - Continue Reading Below
More From The Ultimate Guide to the Royal Family
Harry Carries Briefcase That Reads "Archie's Papa"
Meghan Markle and Prince Harry Arrive in NYC
Advertisement - Continue Reading Below
Princess Beatrice Has Given Birth to a Baby Girl
How Meghan & Harry Spent Their 2-Year Anniversary
Charlotte Has Two Major Milestones Coming Up
Kate Made a Very Common Shoe Shopping Mistake
The Queen Is Lawyering Up, Apparently
Harry & Meghan Are Still Close to the Queen, TYVM
Archie Inspired Harry and Meghan to Take a Stand
Harry & Meghan Had a Hard Time Leaving Royal Life