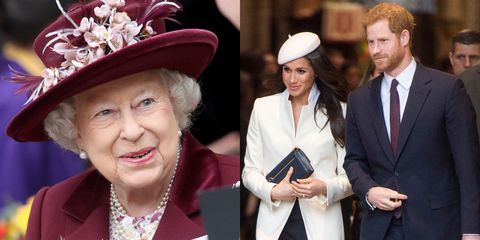 Prince Harry and Meghan Markle are another step closer to their wedding today—Queen Elizabeth II has just given her formal consent to the couple so that they can get married.

As one of the first six people in line to the throne, Prince Harry requires his grandmother's consent before he is allowed to marry. The policy is set out in the Succession to the Crown Act 2013, but luckily, the Queen appears to approve of her grandson's union with Markle.

The Queen has officially given her consent for the marriage of her "most dearly beloved grandson" Prince Harry to Meghan Markle pic.twitter.com/jZ7gSaA5th

In her letter to the Privy Council, Queen Elizabeth stated, "I declare My Consent to a Contract of Matrimony between My Most Dearly Beloved Grandson Prince Henry Charles Albert David of Wales and Rachel Meghan Markle, which Consent I am causing to be signified under the Great Seal and to be entered in the Books of the Privy Council."

Although Prince Harry and Markle could've married without the Queen's consent, it would've prohibited the royal from ever ascending to the throne (even though it's unlikely Prince Harry will ever have the opportunity to do so).

News of the Queen's consent being granted comes after reports that Markle has undergone security training in case she is ever kidnapped once she becomes a member of the royal family. Markle was also officially baptised into the Church of England last week, another important step in becoming a member of the British royal family.

Markle's royal wedding to Prince Harry is due to take place on May 19, 2018, at St George’s Chapel at Windsor Castle.