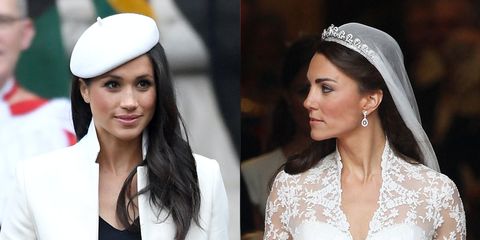 Brace yourselves, because there's some major royal drama brewing. According to Entertainment Tonight, Meghan Markle is very concerned about upstaging Kate Middleton's iconic wedding dress, and she's selecting her own cautiously.

According to Entertainment Tonight's royal expert, Katie Nicholl, Markle will be attempting to keep her wedding dress choice under wraps until the day itself. She says:

"I expect that Meghan will go to great lengths to keep her wedding dress designer a secret until the moment that she emerges from the bridal car. Let's be honest, this is a girl who knows how to keep a secret. She and Harry kept their romance clandestine for months, so she knows how to stay tight-lipped… There's going to be so much attention on the dress."

And that's not all. Nicholl also revealed,

“There have been reports that [Meghan’s] considering spending hundreds of thousands of pounds on a wedding dress. I think that’s incredibly unlikely,” the author noted. “Kate Middleton's dress cost 150,000 pounds. It was her parents, Carol and Michael Middleton, who paid for that bill. I think it was very unlikely that Meghan would spend more than that and in doing so try and upstage a future queen.”

However, if Markle's outfit choices are anything to go by, she loves wearing couture. In her official engagement portraits, she wore a $75,000 Ralph & Russo gown, which she allegedly privately purchased. So keeping her own wedding dress under Middleton's (still hefty) budget could be tricky.

As for Nicholl's own guesses on what Markle will select for her wedding day, she revealed, "I think you will be probably pleasantly surprised for Meghan the 'rule breaker' when it comes to this dress. I think it's gonna tick all the right boxes: traditional, elegant, sophisticated, memorable, and fitting." We'll just have to wait and see.

Related Story
An Obsessive Timeline of Harry and Meghan
Amy Mackelden Amy Mackelden is a freelance writer, editor, and disability activist.
This content is created and maintained by a third party, and imported onto this page to help users provide their email addresses. You may be able to find more information about this and similar content at piano.io
Advertisement - Continue Reading Below
More From The Ultimate Guide to the Royal Family
Why Harry's Memoir Release Date Has Upset People
The Royals Are Worried About Prince Harry's Memoir
Advertisement - Continue Reading Below
Harry Is Putting the Queen in a Difficult Position
Are Will & Kate Sending a Message to Harry & Meg?
Harry and Meghan Reportedly Have a Four-Book Deal
Rare Photos From Diana and Charles' Wedding
Prince George Looks So Grown-Up in New Portrait
Whatever Happened to Archewell Audio?
Prince Harry Is Set to Publish a Memoir
For Prince George Turning 8 Is a Fashion Milestone