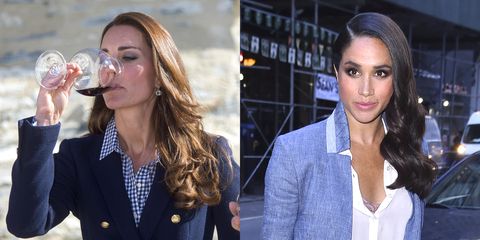 Exciting news for fans of the royal family. Soon, you will be able to share emojis featuring Kate Middleton and Meghan Markle, and, yes, I'm being completely serious.

Related Story
Shop Every One of Meghan Markle's Best Looks

Someone had the brainwave of creating royal emojis, and releasing them ahead of the royal wedding in May 2018. Think Kimoji, but even more regal, if that's possible.

The company releasing these royal wonders is called DRKHORS Media, and their selection will also include several emojis featuring Pippa Middleton. Namely, there's an image that recalls her bridesmaid dress at her sister's wedding, along with the caption, "Does my bum look good in this?"

According to TMZ, who spoke to a rep for the company behind the controversial emojis, "KateMoji will focus on Kate and her royal family, while MeghanMoji will focus on Meghan and Harry falling in love. Each package will include British sayings and phrases." Basically, the emojis will cover every aspect of royal life that you care about.

The official website asks visitors, "What do you want to see Kate and Meghan doing in their emojis?" which means that the emojis are still very much in development, and your favorite moments might make an appearance.

Popular phrases such as "American princess," referring to Markle's inception into the British royal family, and "cheeky bugger" will also feature, along with emojis of Middleton drinking wine. There's an extremely recognizable emoji of Markle wearing her blue short suit, too:

Basically, if you love the royals, then you're going to need these new emojis when they drop. (And we will let you know when they do!)

Related Story
Meghan and Harry Made Surprise Trip to Belfast
Amy Mackelden Amy Mackelden is a freelance writer, editor, and disability activist.
This content is created and maintained by a third party, and imported onto this page to help users provide their email addresses. You may be able to find more information about this and similar content at piano.io
Advertisement - Continue Reading Below
More From The Ultimate Guide to the Royal Family
Comparing the Two Biggest Royal Weddings
How the Queen Ends Awkwardly-Long Handshakes
Advertisement - Continue Reading Below
The Queen Has a Rule Against Bad Talking Family
The Queen Took a Pic of Philip With Her to Funeral
The Queen's Tolerance Was the Key to Her Marriage
Will & Kate Welcomed Harry Back Into Their Group
Queen Left a Handwritten Note on Philip's Coffin
The Queen Said Grief Is the Price We Pay for Love
All of the Photos from Prince Philip's Funeral
The Queen Wore This Brooch to Philip's Funeral