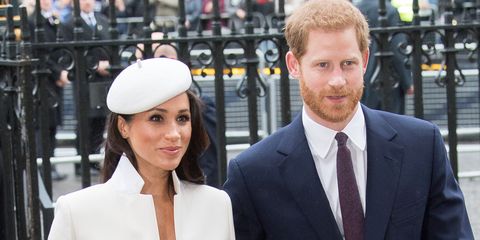 According to reports, bets have been suspended on Meghan Markle's wedding dress designer, because it's believed that someone has leaked information about who the future royal has chosen to design her gown.

The Daily Mail is reporting that Ralph & Russo has become an extremely popular betting choice, as being the designer of Markle's wedding dress. Apparently, this is leading bookmakers to believe that the royal wedding dress designer has already been chosen, so they are refusing to take any further bets.

Related Story
Shop Every One of Meghan Markle's Best Looks

A spokesperson for British bookmaking firm Ladbrokes told the Daily Mail, "It looks as though Meghan's made her mind up as far as her dress is concerned, so we've decided to pull the plug for the time being."

Markle is known to be a fan of design house Ralph & Russo, and opted to wear one of their gowns for her official engagement portraits. She even went so far as to break one of the Queen's fashion rules, by wearing the sheer dress, which has a somewhat revealing top section.

The $75,000 gown was apparently "privately purchased," meaning that Markle already has a relationship with the designer, and that she's a fan of their couture.

Before all bets were halted, the Daily Mail reports that Ralph & Russo were the clear favorite amongst betters, edging ahead of other designers known to have relationships with Markle, including Erdem, Roland Mouret, and Victoria Beckham.

Unfortunately, we won't officially find out what Markle will be wearing to the nuptials until her actual wedding to Prince Harry on May 19.