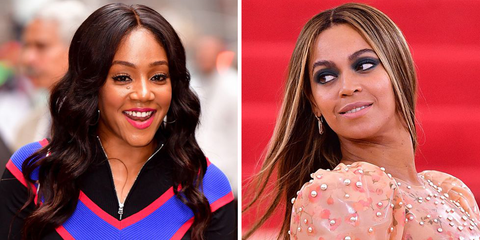 Tiffany Haddish can make any story hilarious, but in a new profile in GQ, she reveals how she met Beyoncé, and it's definitely one of the weirder celebrity friendship origin stories out there.

According to GQ, Haddish met Beyoncé at a party in December 2017. Allegedly, Beyoncé went up to Haddish and said, "I'm Beyoncé," and the night only got more bizarre from there.

Haddish told GQ, "There was this actress there. That's just, like, doing the mostest. One of the most things she did? She bit Beyoncé in the face." Unfortunately, Haddish wouldn't reveal the identity of the biter, but still. This is a pretty wild way to meet the iconic Destiny's Child singer.

The drama continued all night, and "Beyoncé's friend walked up and was like, 'Can you believe this bitch just bit Beyoncé?'" I'm sure you'll all join me in agreeing that noone should ever bite Beyoncé without her permission.

Because Haddish is just beyond great, she defended her new friend in the best way, by telling her, "I'm going to beat somebody ass at your party. I just want to let you know that." This, Haddish recalls, is how she got her selfie with Beyoncé:

And that's not all. At the end of the night, Haddish found Beyoncé at the bar and asked her, "Did she really bite you?" When Beyoncé said yes, Haddish was mad as hell: "She gonna get her ass beat tonight."

So, there you have it. A drug-addled actress bit Beyoncé on the face, and Haddish sprung to her rescue. And, sadly, we may never know who that actress was.

Related Story
Tiffany Haddish Saw Beyoncé Shut Down an Actress
Amy Mackelden Amy Mackelden is a freelance writer, editor, and disability activist.
This content is created and maintained by a third party, and imported onto this page to help users provide their email addresses. You may be able to find more information about this and similar content at piano.io
Advertisement - Continue Reading Below
More From Celebrity
What Happens on Katie's Season?
Jennifer Lopez Wears Old Bracelet From Ben Affleck
Advertisement - Continue Reading Below
Simone Biles Cheers on MyKayla Skinner
See the Royals Socialize at a 1991 Cocktail Party
Eugenie's Pics from Inside Harry and Meghan's Home
Queen Trolled Tourists Who Didn't Recognize Her
Blake and Ryan Recreated Their First Date on IG
Charles Expertly Ignored Boris Johnson's Snafu
How Kitty Spencer's Wedding Dress Honored Diana
Dolly Parton On the #FreeBritney Movement