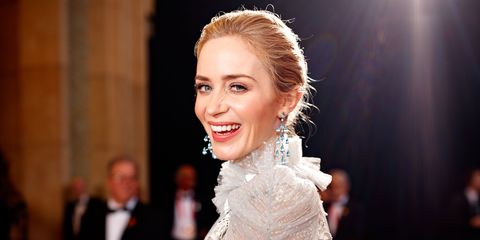 Amazing news for fans of The Devil Wears Prada—Emily Blunt would consider returning for a sequel to the 2006 movie, which we already know would center around everyone's favorite character, Emily Charlton.

The author of the book The Devil Wears Prada, Lauren Weisberger, has already written a sequel to her uber-popular book, which means that the story is ready.

Due out in June 2018, the sequel When Life Gives You Lululemons, follows Emily in her new role as an "image consultant" as she moves from New York to Greenwich, Connecticut to work with a new A-list client. Clearly, Emily's no-nonsense attitude, which made her so hilarious in The Devil Wears Prada, will fit perfectly with her new job.

In a new interview, Blunt tells Entertainment Tonight, "I mean if everyone wanted to do it, it would be cool... I’d be down." Start making some phone calls; let's get this party started!

And as for her co-star, Meryl Streep, who infamously played magazine tycoon Miranda Priestly, and who worked with Blunt again in Into the Woods and Blunt's new film Mary Poppins Returns, Blunt joked:

"We have really set a tone that we never play characters that like each other very much. And so we are continuing with that tradition in this. I don’t know if we could ever play like best pals in something. It’s just not what works for Meryl and I."

The fact that Blunt would happily return to play her character from The Devil Wears Prada brings us one step closer to finally getting the sequel we've always hoped for. Because the first movie featured Blunt's breakout performance, it's only fitting that the second film would follow her journey.

Related Story
This Deleted Devil Wears Prada Scene Changes a Lot
Amy Mackelden Amy Mackelden is a freelance writer, editor, and disability activist.
This content is created and maintained by a third party, and imported onto this page to help users provide their email addresses. You may be able to find more information about this and similar content at piano.io
Advertisement - Continue Reading Below
More From Celebrity
See the Royals Socialize at a 1991 Cocktail Party
Eugenie's Pics from Inside Harry and Meghan's Home
Advertisement - Continue Reading Below
Queen Trolled Tourists Who Didn't Recognize Her
Blake and Ryan Recreated Their First Date on IG
Charles Expertly Ignored Boris Johnson's Snafu
How Kitty Spencer's Wedding Dress Honored Diana
Dolly Parton On the #FreeBritney Movement
Will & Kate Are Nervous About George's Future
George Won't Be Forced to Go to Boarding School
Diana Would Have Written a Memoir Too, Friend Says