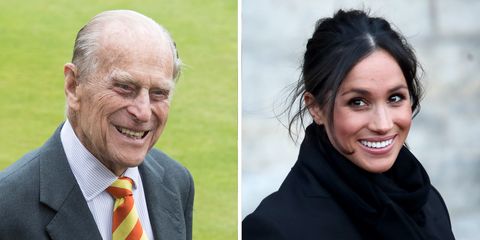 As the royal wedding approaches, it's fascinating to hear about how Meghan Markle is getting on with her new in-laws. And according to a new story in the Express, Markle "got on" well with Prince Harry's grandfather when she first met him.

According to the publication, Markle used a clever trick to get on Prince Philip's good side. Apparently, "Meghan asked a lot of questions, about Philip’s side of the family and his connection to Greece."

Her questions about his heritage made the Queen's husband warm to Markle right away, as she had clearly taken an interest into the family she was marrying into.

As for whether or not Markle researched Prince Philip's heritage on her own—he was born in Corfu in Greece—the source revealed to the Express that Prince Harry might have helped with the plan. The source said, "Was she told to say that by Prince Harry? I don’t know. But she got really involved in the conversation."

Clearly, Markle is fitting right in with her future in-laws, with the Express revealing, "The Duke of Edinburgh really got on with her." And the main reason that Prince Philip apparently approved of Markle right away "was because she was very bold." It certainly sounds as though she's ready to join the British royal family.

As for who will play Prince Philip in The Crown Season 3, following Matt Smith's departure, Netflix just announced that Game of Thrones and Outlander star, Tobias Menzies, would be taking over the regal role.

Related Story
Kate Middleton and Meghan Markle Emojis Are Coming
Amy Mackelden Amy Mackelden is a freelance writer, editor, and disability activist.
This content is created and maintained by a third party, and imported onto this page to help users provide their email addresses. You may be able to find more information about this and similar content at piano.io
Advertisement - Continue Reading Below
More From The Ultimate Guide to the Royal Family
Queen's Cousin Accused of Selling Access to Putin
Meghan Wore a Meaningful Necklace for Vax Live
Advertisement - Continue Reading Below
Queen Elizabeth Is Now Selling Beer and Gin
Meghan Markle Wore Carolina Herrera for Vax Live
Princess Charlotte, 6, Tells Everyone She's 16
Meghan Wears Cartier Tank Watch for Vax Live
Meghan Discussed Her Daughter in Vax Live Speech
Prince Harry Talks Digital Pandemic at Vax Live
Harry and Will Have Been Arguing for Months Now
Prince Harry Doesn't Regret His Oprah Interview