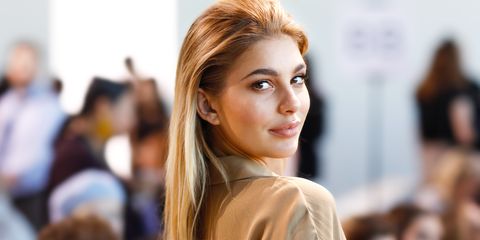 Can we call it official yet? Recent photos of Leonardo DiCaprio with his rumored fling, model Camila Morrone, seem to confirm that their relationship is heating up. The couple was spotted strolling around the West Village on Tuesday, exactly one month after attending Coachella together, where they were reportedly "hugging and being affectionate" an onlooker told Us Weekly.

The new pair wore matching white t-shirts and sneakers for the outing, while he opted for jorts and she rocked cargo pants. This isn't the first time the couple's been photographed together. They were seen packing on PDA after breakfast in West Hollywood in March and deplaning a private jet together in January.

It's hard not to notice the similarities between Morrone and DiCaprio's past girlfriends. After his split with Sports Illustrated swim beauty Nina Agdal in 2017, he kept up a streak of dating young models, including Lorena Rae, 23, and Juliette Perkins, 19. Now, he's with 20-year-old Morrone.

So who is the 20-year-old that's captured Leo's heart? Here's what you need to know about the up-and-coming model and actress.

Leonardo DiCaprio and Camila Morrone in New York on May 15.
John Sheene/ACE Pictures/Shutterstock

Morrone has amassed over 1 million followers on Instagram, where she posts snaps of her travels, modeling gigs, red carpet appearances, and, no shame, a pic of herself indulging in a massive iced Starbucks coffee.

She's a model and aspiring actress

Morrone has starred in major campaigns for Topshop, Desigual, Ay Not Dead jeans, among others, reports PEOPLE. And according to a recent Instagram post, she's also part of the #FirstAtSephora campaign for their new eye palettes.

However, she's segueing into acting. Most recently, she appeared in the Bruce Willis action film, Death Wish.

She probably met Leo at a fundraiser gala

Last year, Morrone attended the Cannes amfAR Gala, one of the most glamorous events at the Cannes International Film Festival in the south of France. DiCaprio is known to attend the annual fête, an AIDS fundraiser. However, reports PEOPLE, their relationship truly began heating up when they attended the same dinner at Art Basel in Miami in December.

She runs in an exclusive crew of model-friends that includes Hailey Baldwin, Kaia Gerber, Bella Hadid, and Kendall Jenner.

Her family is famous, too

Morrone's mother is Lucila Solá, an Argentinian actress, who is said to be dating Al Pacino. On an appearance on The Late, Late Show with James Corden, the 20-year-old implied to the host she called Pacino up after landing her first acting gig, a role in James Franco's 2013 film Bukowski. Although she didn't mention Pacino by name, she called him a "a very established actor."

Morrone and Sola at the WanderLuxxe House during the 2018 Sundance Film Festival on January 21, 2018 in Park City, Utah.
Getty Images
Rose Minutaglio Staff Writer Rose is a Staff Writer at ELLE.com covering culture, news, and women's issues.
This content is created and maintained by a third party, and imported onto this page to help users provide their email addresses. You may be able to find more information about this and similar content at piano.io
Advertisement - Continue Reading Below
More From Celebrity
Royal Family Shares Rare Photo of Prince Philip
Chloe From 'Too Hot to Handle' Is in 'The Circle'
Advertisement - Continue Reading Below
There's Drama Over Prince Harry's Funeral Attire
Jennifer's Rep Breaks Silence on Adoption Story
Princess Eugenie's Prince Philip Tribute
Serena Williams Signed a Major TV Deal With Amazon
Chrissy Wrote Luna the Sweetest Birthday Message
Prince Harry Has Met Princess Eugenie's Son August
The Queen Returns to Work After Philip's Death
A Brief History Lesson on Brad and Jen