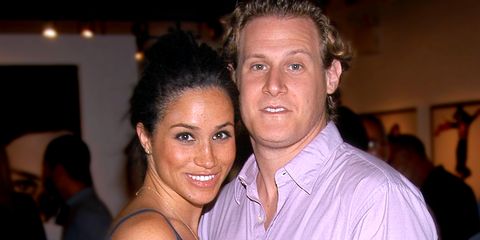 Thanks to Princess Diana's biographer, Andrew Morton, a new book all about Meghan Markle, called Meghan: A Hollywood Princess, is due to be released on April 17.

While the unofficial biography contains a number of revelations, the most shocking has to be the way that Markle left her first husband, movie producer, Trevor Engelson.

Morton reveals that Markle and Engelson met in a Hollywood bar, and that the producer helped her get a small part in the Robert Pattinson movie, Remember Me.

In an excerpt from Morton's new book, published in The Sunday Times, the writer reveals that Engelson made a big impression on Markle when they first met in 2004. At the time, she was a struggling actress, and at "More than 6ft tall, with reddish blond hair and blue eyes, Trevor Engelson had the air of a Matthew McConaughey-lite." Interesting.

Engelson was also, apparently, extremely positive, and told Markle, "Hope is the greatest currency we have in this business." His lame pick-up line worked, and the pair began dating.

However, their relationship experienced problems early on. Engelson was apparently working on the 2007 movie License to Wed, starring Mandy Moore and John Krasinski. According to Morton, "Meghan secretly hoped there would be a role for her. It was to become a source of conflict for the couple, with Meghan disappointed that Trevor didn't try harder to include her in some of his productions."

Markle and Engelson got married in 2011, but they divorced just two years later in 2013. While Markle had relocated to Toronto for Suits, Engelson stayed in Los Angeles. The distance made their marriage more challenging.

According to the new book:

"Trevor went from cherishing Meghan to, as one friend observed, 'feeling like he was a piece of something stuck to the bottom of her shoe.' A wealthy entrepreneur friend claimed the marriage ended so abruptly that Meghan sent her wedding and engagement rings back to Trevor by registered post. Another confirmed that the decision to end the marriage was made by Meghan and that it had come 'totally out of the blue.'"

Apparently, Engelson "can barely contain his anger" about the brutal situation even now.

According to Morton, "She was her own woman now, earning a steady income, making new friends on-set and off, no longer dependent on her husband’s connections."