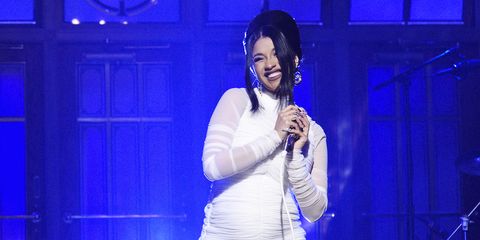 Cardi B has revealed that she is pregnant, by wearing a skintight, custom Christian Siriano gown on Saturday Night Live.

Related Story
People Are Telling Cardi B to Shave Her Stomach

Cardi B's appearance on SNL was epic for so many reasons, but during a performance of her new song "Be Careful," the camera panned back to reveal the rapper's baby bump. You can watch her full performance now:

Afterwards, tributes flooded in for the rapper, and her fiancé, Migos' Offset.

Congratulations to my girl @iamcardib, new baby on the way!You looked stunning tonight in custom Siriano on @nbcsnl it was an honor. #cardib pic.twitter.com/8UXiknQUJj

Cardi B got engaged to Offset in October 2017, when he proposed onstage at Power 99's Powerhouse concert in Philadelphia. The "Bodack Yellow" singer showed off her incredible ring on Instagram: 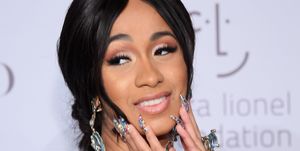 Cardi B Is a Princess in Christian Siriano
Advertisement - Continue Reading Below
More From Celebrity
A Look at Royal Family Portraits Through the Years
Are The Weeknd's 'After Hours' Lyrics About Bella?
Advertisement - Continue Reading Below
Kendall and Harry Had a Moment At the Brit Awards
Dwyane Wade on Getting Zaya's Pronouns Right
Harry Styles' Diana-Inspired Brit Awards Outfits
Jenna Dewan and Steve Kazee Are Engaged
Kim Seemingly Tried to Kiss Kanye on a Kiss Cam
Ashley Graham Continues to Spread Body Positivity
'Bachelor' Victoria F. & Peter's Ex Had a Fight
Watch Meghan Attend the Ballet with a Puppet