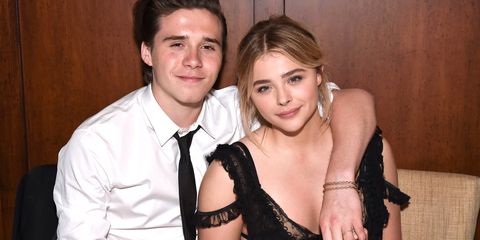 Despite never revealing their breakup, it appears that Brooklyn Beckham and Chloë Grace Moretz have parted ways again.

Over the weekend, Beckham was photographed kissing a model, and the new couple's very public displays of affection suggest that he's no longer dating actress Moretz.

The Sun reports that Beckham was visiting the Honorable Society Tattoo Parlor with Canadian model Lexi Wood to get a new tattoo. The tattoo artist, Doctor Woo, confirmed this in an Instagram, writing, "Classic Vargas pinup for a classic fella @brooklynbeckham."

Beckham's rumored new significant other has 90,ooo followers on Instagram. To date, she's modeled for magazines including Cosmopolitan Russia and Playboy. And judging by photos of the pair, Beckham is extremely into her:

If you're unconvinced, the Daily Mail has even more photos of them together, so prepare yourself for heartbreak if you're a Moretz fan.

Moretz and Beckham have been in an on-and-off relationship since 2014. Despite breaking up several times since then, the pair usually finds their way back to one another, and regularly post romantic Instagrams about their relationship.

Just over a month ago, Moretz wished Beckham a happy birthday, by writing on Instagram, "Never Stop Smiling, I Love You, Happy Birthday Brooklyn 🎈♥️":

And on Valentine's Day this year, she posted the sweetest message to her two loves:

My Two Valentines ❤️ I love you

But for now, it appears that Moretz and Beckham are taking some time out to date other people. And if this latest photo of Beckham kissing a model is anything to go by, they may not be getting back together any time soon.