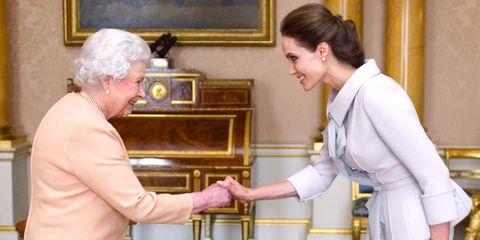 Not only did Angelina Jolie meet Queen Elizabeth II, when she received an honorary damehood in 2014, but the actress has been fostering a relationship with the royal ever since. 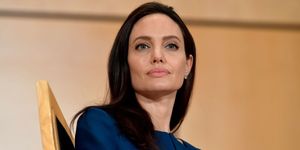 According to People, for a new documentary on ITV called The Queen’s Green Planet, Jolie and her six children visit Namibia to highlight forest conservation, and the actress has only kind words to say about the British monarch.

In the documentary (via People), Jolie reveals, "For us to come here and say to the children, 'This is why it's important to plant a tree,' that's the biggest message I can teach my kids, and it's something that they’ve certainly learned from Her Majesty and her message."

Jolie received her damehood in 2014 for her humanitarian work, and her efforts to end sexual violence in war zones.

And that's not all, as Jolie continues:

"They ask me, 'Why is it so important to her?' You know when you sit up at night in a tent with your kids and they say, 'Why does the Queen of England care about planting trees in Africa?' What it comes down to is, you say to the kids, 'You know really, you don’t know her, you can't understand all that it means to be a queen... You know she’s just this really lovely lady who really cares about people around the world, and she really cares about the future, and she wants your grandkids and her grandkids to be able to be running around, enjoying nature and other cultures... She thinks that really matters and I agree with her."

Basically, Jolie and the Queen are very, very, quite good friends now, thank you very much.

Related Story
Angelina Jolie’s Children Supported Her in 2017
Amy Mackelden Amy Mackelden is a freelance writer, editor, and disability activist.
This content is created and maintained by a third party, and imported onto this page to help users provide their email addresses. You may be able to find more information about this and similar content at piano.io
Advertisement - Continue Reading Below
More From The Ultimate Guide to the Royal Family
A Look at Royal Family Portraits Through the Years
A Look Back at Princess Anne's Life in Photos
Advertisement - Continue Reading Below
Shop Meghan's Stunning $30 Summer Dress
Duchess Kate Wears a Sleek Green Blazer
Meghan & Harry Update Archewell Website
Will Is in the Dark About Sussex/Oprah Interview
Oprah Says Her Sussex Interview Is Her Best Ever
How Kristen Stewart Is Prepping to Play Diana
How to Make the Queen's Favorite Cocktail
The Queen Told Harry to Uphold His Family Values