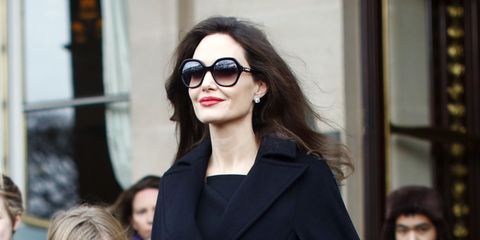 According to a new report in Entertainment Tonight, Angelina Jolie is moving on from her split from Brad Pitt. Although her new relationship is described as "not serious," the actress is apparently looking for love again.

A source reveals to ET that, "Angie has told some friends she isn't ready to date, but she has been seeing a handsome, older-looking man who is a real estate agent. He isn't a celebrity or high profile in any way." Everyone loves a bit of Million Dollar Listing, right?

Even though her new, older man isn't necessarily for keeps, it could be bad news for Jolie-Pitt-shippers, hoping that the pair might one day reunite.

ET's source says, "People talk about them reuniting, but it will never happen. Things between Brad and Angie really ended poorly, and while they've attempted therapy with the children, they can barely be in the same room together." I'm not crying—you're crying!

And in a particularly brutal burn, the source tells ET that, "Just having another adult to spend time with has been helpful." Let's hope that Pitt isn't reading the tabloids.

As for Pitt's own love life, apparently he's dating too. ET revealed that the actor is "very private about who he’s seeing, but he does continue to casually date. The women he sees are not in the public eye."

Basically, Jolie and Pitt have both opted to date outside of their Hollywood circles following their break-up, which means that ANYONE stands a chance with them. Which is good to know.

Related Story
Angelina Jolie Talks Relationship with Brad Pitt
Amy Mackelden Amy Mackelden is a freelance writer, editor, and disability activist.
This content is created and maintained by a third party, and imported onto this page to help users provide their email addresses. You may be able to find more information about this and similar content at piano.io
Advertisement - Continue Reading Below
More From Celebrity
Travis Covered His Ex' Name With Tattoo for Kourt
Kendall Jenner Wore a Bedazzled Pink Cowboy Hat
Advertisement - Continue Reading Below
Kourtney & Travis Will Def "Have a Baby Together"
Britney Is Done With "Rude, Humiliating" Family
Ben & Jen Are Meeting Up "Whenever Possible"
Anna Kendrick Looked Pretty in Pink at a Premiere
John Mulaney & Olivia Munn Might Split Up: Source
The Sussexes Worried Archie Would Attract Mockery
Diana Would Be "Thrilled" for Harry and Meghan
'Friends' Actor James Michael Tyler Has Died at 59