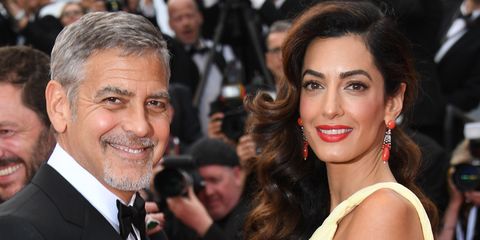 George and Amal Clooney's love affair has been well-documented, but thanks to a new interview with the internationally renowned human rights lawyer, we're finally hearing about how exactly she was wooed by the infamous actor. 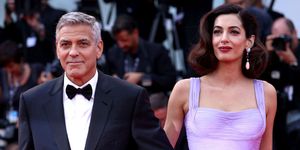 In a new interview with Vogue, Amal gets candid about her life with the movie star and their twins, which George affectionately calls "the knuckleheads." But perhaps the biggest revelation relates to how exactly George wooed her in the first place.

Obviously, as he's a world famous movie star, it's not difficult to imagine that he's capable of amping up the romance in any given situation. But as for how Amal's feelings really developed, it all started over email, and in a dog voice. Prepare yourself for the worst flirting you've ever heard of in your entire life.

So, we already knew that the Clooneys met when Amal visited George's house on Lake Como in Italy with a friend. They hit it off, and decided to stay in touch, sending each other copious emails. And here's where it gets interesting.

According to Vogue, "Amal is a big emailer, and George responded with a clownish gambit, writing her repeated notes in the voice of his dog Einstein, who claimed to be trapped in various places and in need of legal rescue."

That's right, folks. George Clooney charmed his future wife by pretending to be a dog, and emailing her to ask for help. There are literally no words.

Related Story
See Amal Clooney's Wedding Dress IRL
Amy Mackelden Amy Mackelden is a freelance writer, editor, and disability activist.
This content is created and maintained by a third party, and imported onto this page to help users provide their email addresses. You may be able to find more information about this and similar content at piano.io
Advertisement - Continue Reading Below
More From Celebrity
Princess Eugenie's Son Got to Meet Prince Philip
Ashley Graham Is Having Twin Boys
Advertisement - Continue Reading Below
Gabrielle Union Danced Topless at a Window
Ben Affleck Is "in Awe" of Jennifer Lopez
Princess Beatrice Has Given Birth to a Baby Girl
Gigi Hadid's Mom Shared Sweet Pics of Khai
Kate & Will Probably Won't Have a Fourth Child
Ben & Jen Plan to Spend the Holidays Together
Kate & Will Are "Anxious" About Harry & Meghan
Mandy Moore Calls Breast Pump Emmy's MVP Accessory